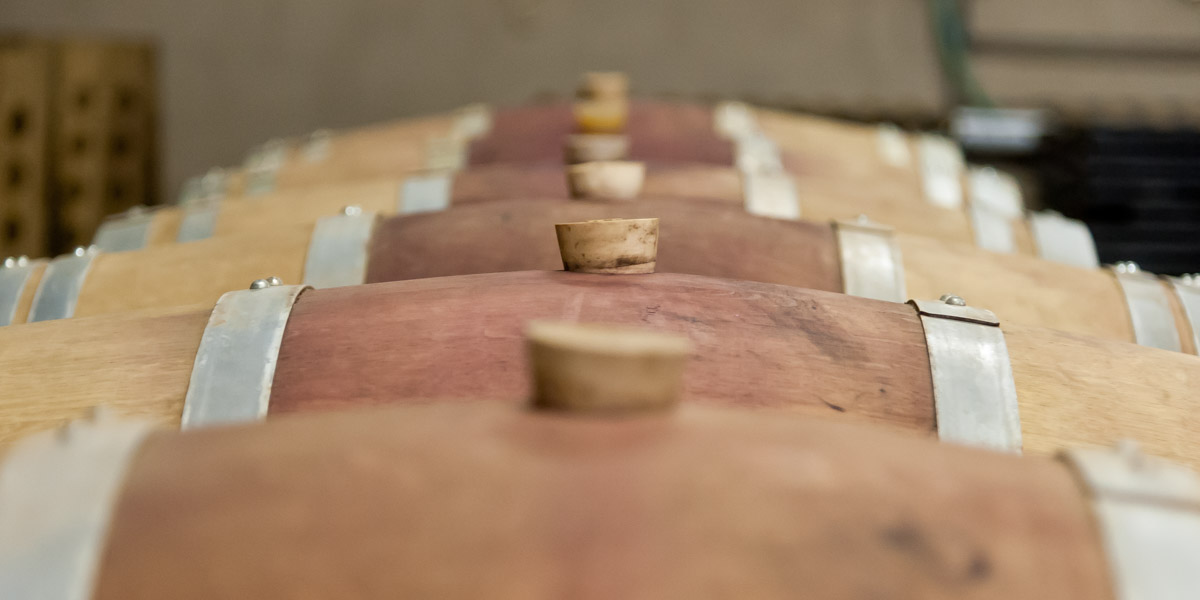 Everyone at some point dreams of being on an idyllic island, lazing about, and swimming in the warm ocean. We are no different and recently had the opportunity of doing just that!

Earlier this year Jaunine spotted a good travel deal which would whisk us off to Mauritius, an island in the warm Indian Ocean to the east of Madagaskar, for seven glorious days of sunshine, rest, and relaxation. Not one for excessive pondering on matters like this she was quick to sign up for the deal and we started getting ready 🙂

Eventually the day arrived for us to be off on our new adventure. Six hours of flying later and we were there – Mauritius ! We arrived late-evening at our hotel, located on the north-eastern side of the island, just over an hour later. We were pleasantly surprised by the warm welcome we received and the fact that they had dinner ready and waiting for us, even at the late hour of the evening. 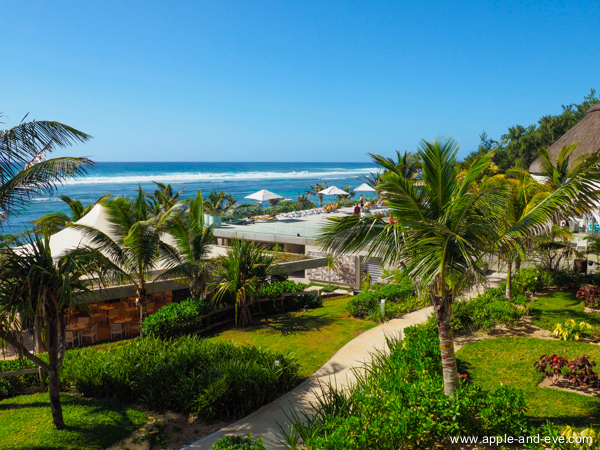 Our view from the balcony of our room on the first morning. 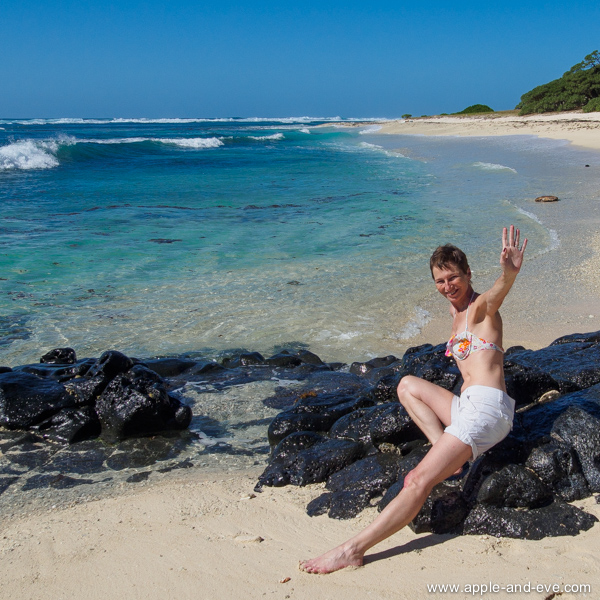 Part of the beach in front of the hotel.

It was quite nice to experience some warmer weather, coming from Cape Town that was getting into winter with the usual winter rain, wind, and cold.

The service at the Centara Poste Lafayette resort was excellent, as was the beer !

The kind of view one would expect to find on a tropical island. This image was shot at one of the many stops we made along the coastline while exploring the island.

Lying in the sun on the beach is not the only activity available, there is much to do in seven days and we tried to experience as much as possible while still taking it easy. 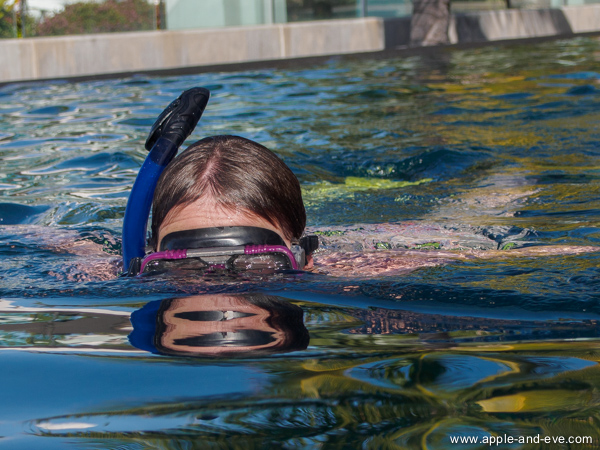 Jaunine tried her hand at snorkeling and attended a snorkelling crash-course in the resort swimming pool.

Although she had fun learning how to snorkel in the pool, Jaunine was surprised when the instructor offered to introduce her to scuba diving – also in the hotel pool 🙂 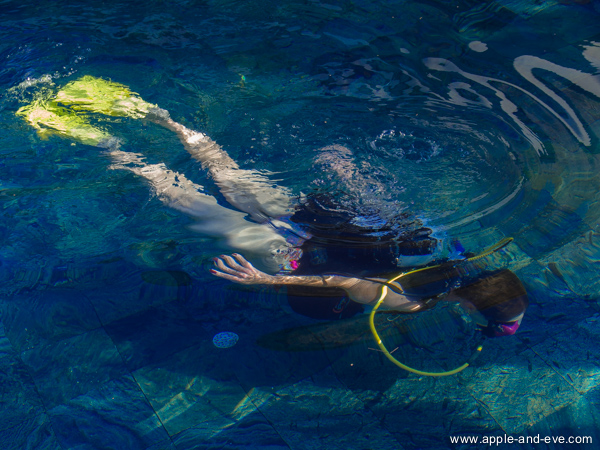 Jaunine looking very comfortable under water with the scuba gear. 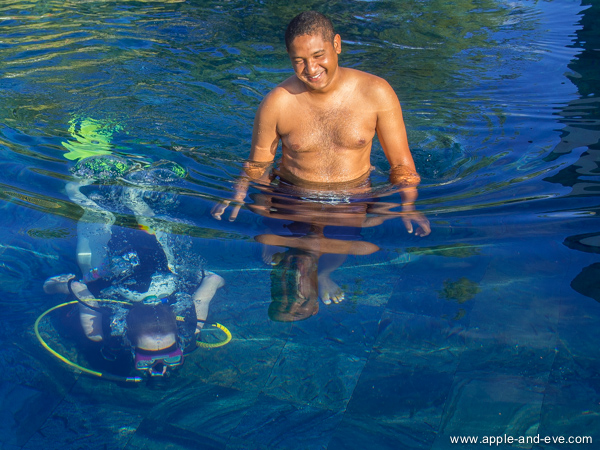 Pascal, the instructor, looking very pleased with his student who took to scuba diving like the proverbial duck to water!

I was less keen on the whole snorkeling idea but enjoyed watching Jaunine swimming under-water up and down the pool 🙂 Afterwards we parked ourselves next to the pool, facing the ocean, and did some reading. 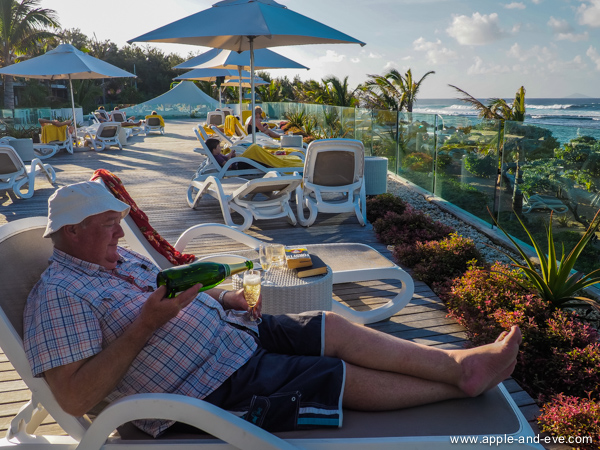 Although sipping cocktails is a very island type of thing to do, we enjoyed some bubbly that we brought along from home. Jaunine grabbed this shot of me while I filled the glasses.

The best way to explore the island is to rent a car and drive yourself. Although the island is relatively small, progress is quite slow because of narrow (and in many places bumpy) roads and quite twisty. It takes a while getting used to the driving style of the locals and a GPS is a must-have accessory, else you WILL get lost since the roads are not always properly marked. Even a GPS is not always a gaurantee that you will find the place you’re looking for – as we discovered on several occasions ! 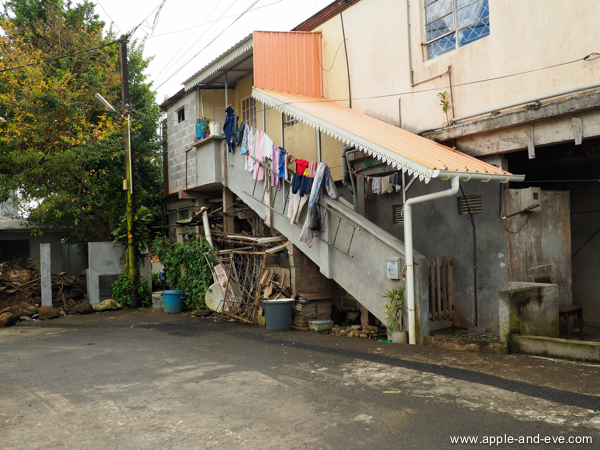 Our GPS assured us that we have arrived at our destination – the botanical gardens in Curepipe !

The enormous crater in the centre of Curepipe. Our GPS had no trouble finding it 🙂

The landscapes and tropical forests found on the southern side of the island are well worth the drive. 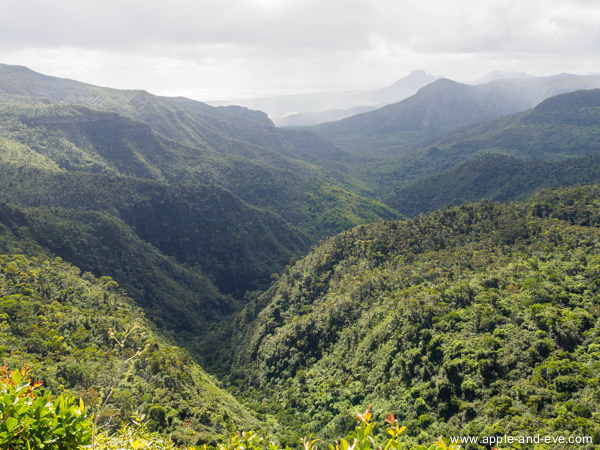 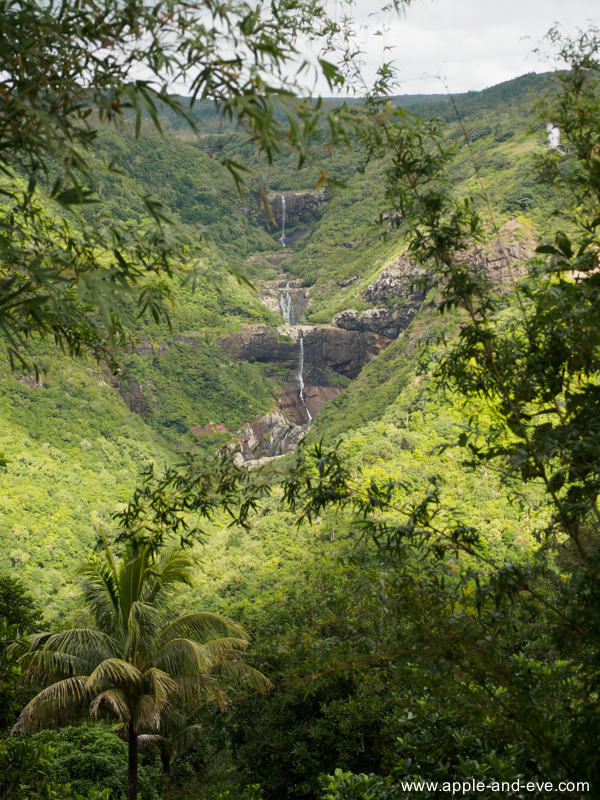 At Cap Malheureux on the south coast one gets a distinct colonial feel, not surprisingly since the British landed there in 1810 when they took possession of the island after attacking the French.. 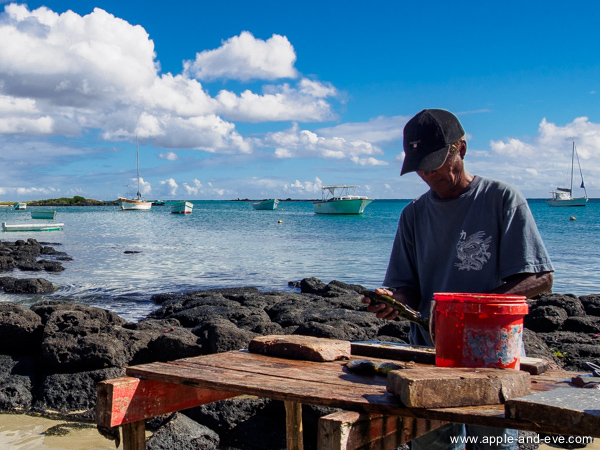 A fisherman gutting a fish caught earlier that morning at Cap Malheureux. 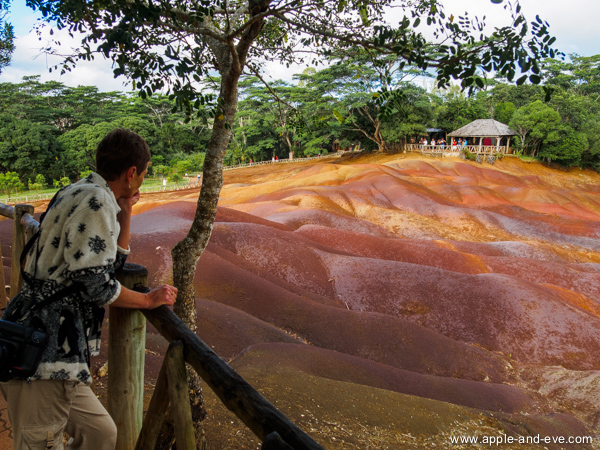 The 7 Couloured Earth at Chamarel, a curious clay that resulted from geo-climatic events estimated to have occurred more than a million years ago! 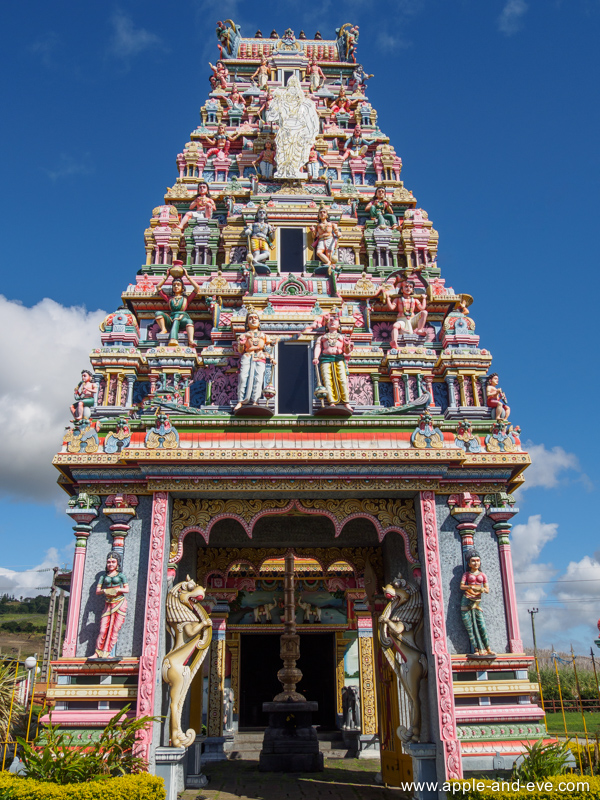 A very colourful Hindu temple – one of many on the island. 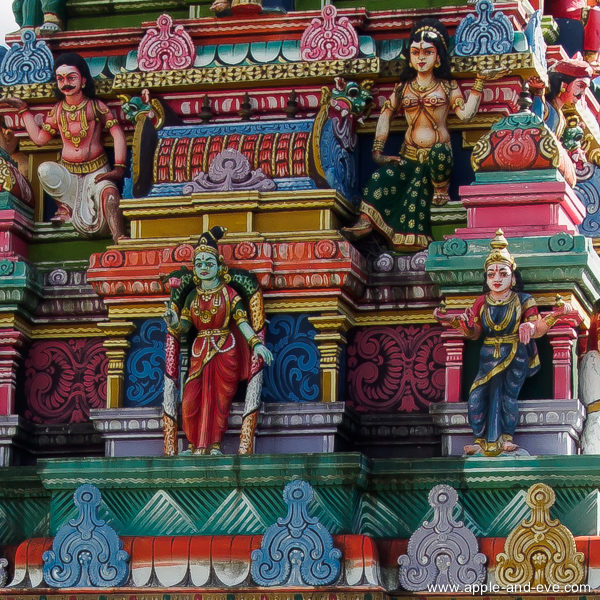 The detail on these Hindu temples are quite amazing, and pink is certainly a much favoured colour 🙂

At Grand Bassin we found a site which is considered the most holy Hindu site outside of India and consists of a lake, various statues, and several temples. The gigantic and spread-out parking areas were indicative of the importance and popularity of this site.

A statue at Grand Bassin – one of many, with the lake visible in the background.

Another colourful statue at Grand Bassin.

While looking around at Grand Bassin we even managed to get our faces painted by a Hindu priest.

We spent a fair amount of time on the west coast, especially the north-west which is a tourist hotspot with much to see and experience. 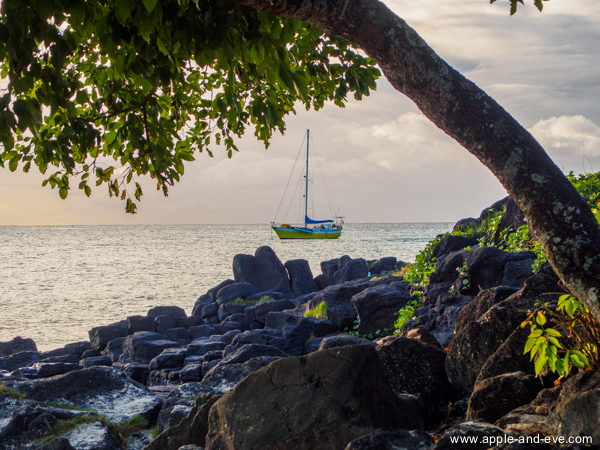 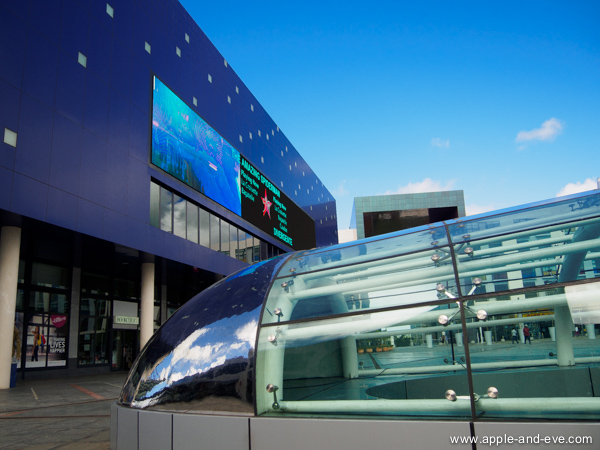 At Grand Baie we came across this very modern and attractive shopping complex. The glass structure covers the escalators and elevators that lead to the underground sections of the centre – very futuristic. 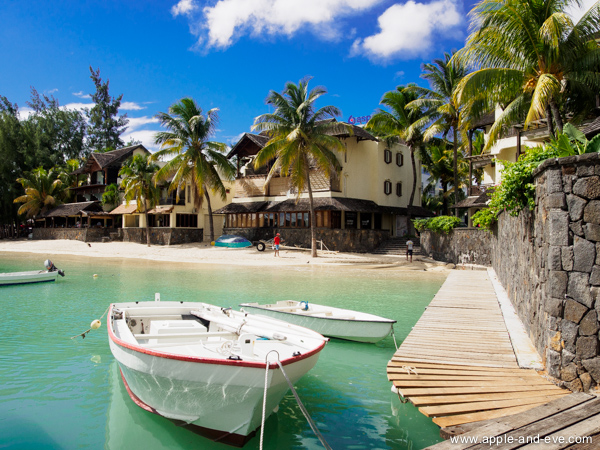 Grand Baie is the top spot to be with many restaurants and shops almost on the beach.

Close to Grand Baie is Mont Choisy with a beautiful beach and almost no waves. Jaunine made full use of the luke-warm water ! 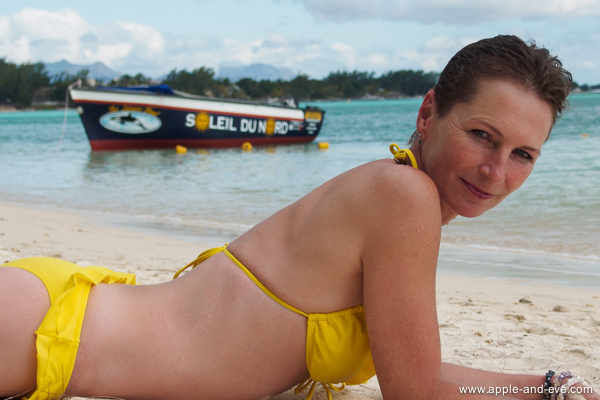 Relaxing on the Mont Choisy beach.

One of the really nice things about tropical islands is the fact that even winter evenings are pleasantly warm, no need to reach for warm clothes when the sun dips behind the horizon! 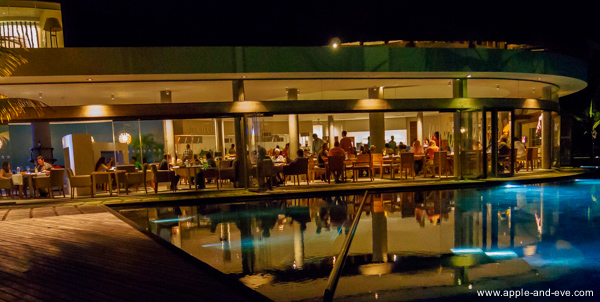 Night view of one of the resort restaurants as seen from the pool. 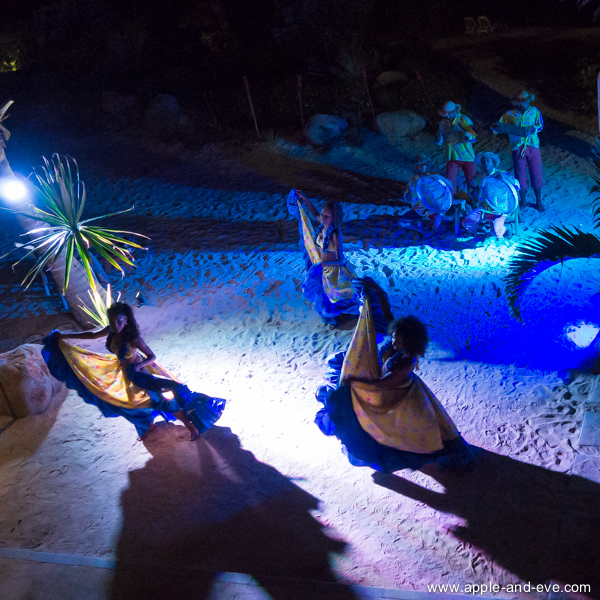 We had some traditional island dancers strutting their stuff one evening on the beach at the resort. 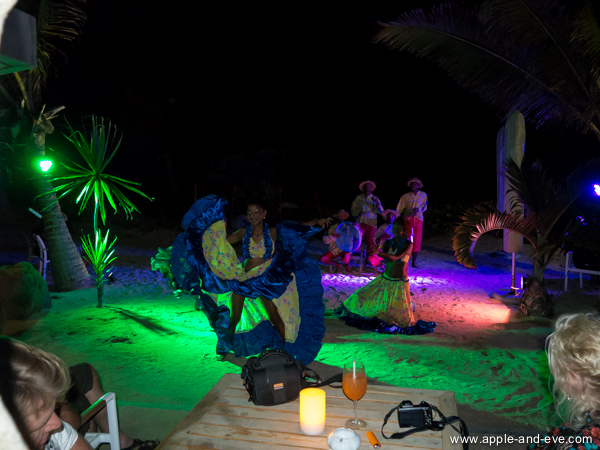 Our seven days on the island passed all too quickly ! 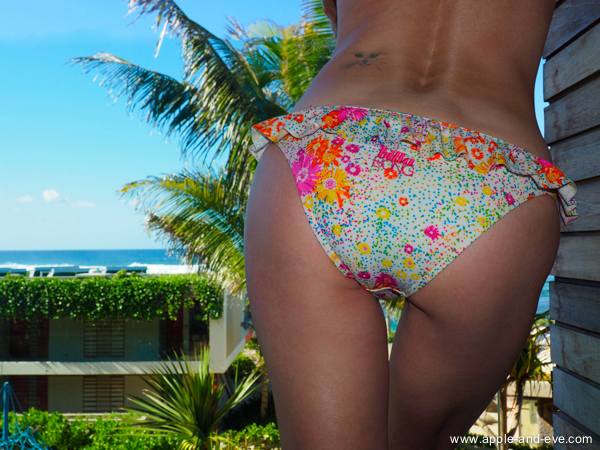 Jaunine having a last look at the ocean from our room balcony before we returned home after a wonderful seven days.

We hope to return to this wonderful island with it’s friendly people again sometime in the future. If you ever have the opportunity to visit Mauritius – just do it !

As always – your comments are welcome and appreciated 🙂

← The month of May
In search of a shipwreck →