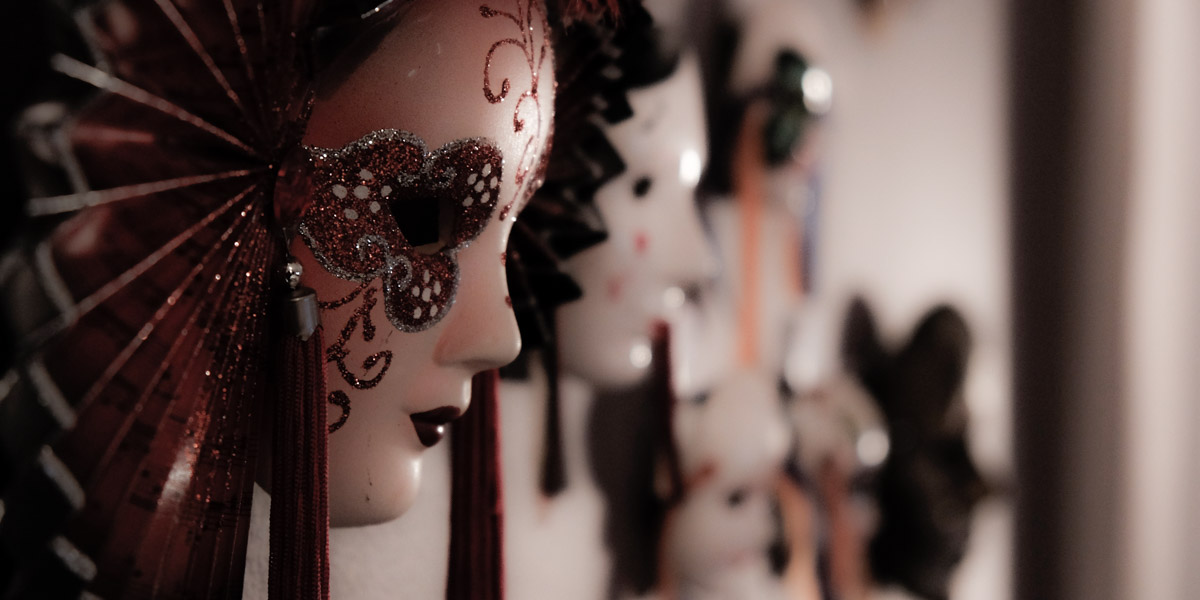 Using the AF-ON focussing technique with the Nikon D800 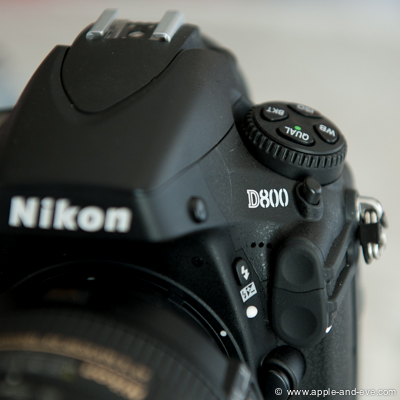 Unlike our usual blog posts about our photographic escapades in general, this one is a more technical one aimed at Nikon D800 shooters in particular, but also at users of other Nikon DSLR’s in general.

Listening to fellow photographers and surfing the web I noticed that there is much uncertainty and confusion around the use of the AF-ON button found on Nikon bodies (and other brands for that matter), so this is my modest attempt at clearing up much of the uncertainty.

First of all – much of the confusion can be cleared up by distinguishing between the simple use of the AF-ON button to initiate auto focus, and the technique that became commonly known as the “AF-ON focussing technique”.

Using the AF-ON button to initiate autofocus by itself has limited use and is perhaps the reason why most photographers simply ignore it, as I did initially. It just did not make a lot of sense to me to use a separate button to activate autofocus when the shutter release button was equally capable of doing just that.

However, the AF-ON focussing technique is a completely different animal and once mastered becomes an extremely useful and time-saving technique. It is this technique that I am describing below. It is certainly nothing new and many photographers have been using it very successfully for years. 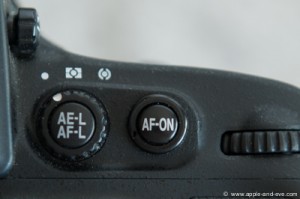 Purpose of using the AF-ON technique

The purpose of using this technique is a simple and very useful one – it allows the photographer to set some focus parameters once and never again – using it for most (if not ALL) shooting conditions and circumstances without having to think or consider what settings your camera is set at, at any moment in time. You can literally set up your focus settings only once and leave it there. It is most useful for (but not limited to) photographers that need to alternate between shooting stationary and moving subjects – wedding photographers jumps to mind.

Whether you are a portrait-, landscape-, wedding-, or sports-photographer – you can shoot with confidence, knowing exactly what to expect from your AF settings, and not having to remember what settings are in effect. Sounds unbelievable? Not so – it works and it works well!

It does mean that you need to practice using this technique once you have your camera set up, but it is worth the effort as many photographers using it can testify. Mastering it is reasonably quick, even I got fluent in it’s use after a day or two of practice.

The principle of how it works hinges around the combined use of the AF-ON button and AF-C (continuous focus), plus some other settings that I will describe later. In essence it boils down getting used to doing two things:

1. Using ONLY the AF-ON button to activate autofocus (with AF decoupled from the release-button), and

The purpose of using the AF-ON button (and decoupling autofocus from the release button) is so that you can focus, release to lock focus, and recompose without the camera refocussing when you press the shutter-release.

A few examples might illustrate the technique more clearly:

1. Action photography : Place the selected focus-point over the subject and press AF-ON. While following the subject you keep the AF-ON button pressed (AF-C will keep focussing and track the subject)  and when you need to take the shot you only have to press the shutter-release.

2. Wedding photography: Imagine the bride walking down the aisle towards you – you place your selected focus-point on the bride, press and hold AF-ON while she approaches (once again AF-C will maintain focus at all times), and you fire away at will by pressing the shutter-release.

3. Portrait photography: Place your selected focus-point on the eye of your subject, press AF-ON to activate autofocus, release AF-ON once focus has been achieved to lock focus, recompose, and shoot.

Notice that you can switch between shooting any of the example scenes above without having to change any focus settings? That’s the beauty of using this technique – no more fumbling with focus settings when you can least afford to!

Setting up the D800 for using this technique is pretty straight forward:

1.  Make sure that the small selector in the left front of the camera (marked  AF  M) is set to AF. 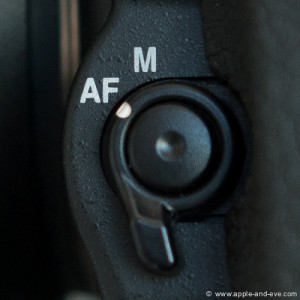 Set this button to AF – Autofocus.

2.  Select AF-C (continuos Focus) by pressing the left-front AF/M button (see step 1 above) and turning the command-dial (rear dial) until you see “AF-C” displayed in the LCD. 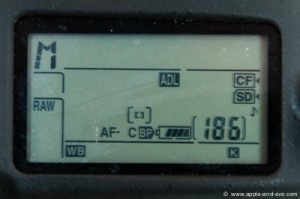 3.  [Updated 30/1/2013] In the Autofocus custom setting menu, set AF-C priority selection (a1) to Release priority. This will allow the camera to fire with no hesitation regardless whether AF-ON is depressed or released, or whether the subject is in focus.

(This setting is mandatory with the D700 and other earlier Nikon models because focus/recompose do not work (with Focus priority selected) when the area under the selected focus point is out of focus after recomposing).

Setting AF-C to Release Priority will make for very smooth shooting and no hesitation when the camera might be adjusting focus while AF-ON is depressed, regardless whether the subject is stationary or moving. Don’t worry, using Release priority does not mean your images are necessarily going to be out of focus!

[Updated 25/02/2013] Although Focus-Priority will work just fine in most situations with the D800 it might still be preferably to use Release-Priority, especially if you are using previous generation bodies (D700, D3, D300) in addition to the D800. This way you will ensure that all your bodies behave in a similar manner. 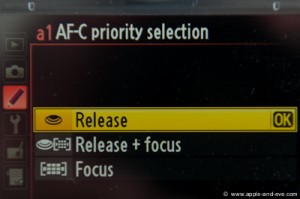 Option a1 in the Custom Settings menu – set it to “Release Priority”.

4.  Set AF-Activation in the custom settings menu (a4) to AF-ON. This will decouple autofocus activation from the shutter-release button. 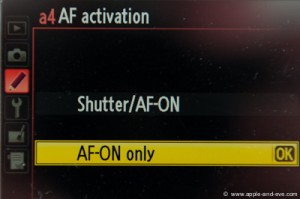 Option a4 in the Custom Settings menu – set it to “AF-ON”.

5.  Optional – you can set the D800 to continuous shooting by adjusting the top left dial to either CL or CH if you want to take successive shots without having to press the shutter-release button repetitively. I suggest that you leave it in this position because a quick press and release gives you a single shot, while keeping the shutter-release pressed longer will give you a series of shots – very handy some times ! 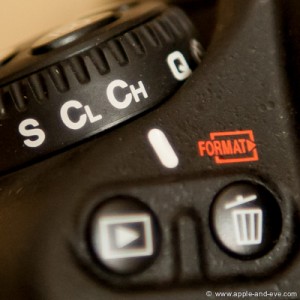 Set the top left dial to either CL or CH to enable continuous shooting.

6.  Set your focus preference to Single, Dynamic 9/21/51 points, or 3D. Here you need to exercise some caution and consider your options carefully. Explaining these options can fill  a whole chapter in a thick book and I’m not even going to attempt the short version of it. Suffice to say that my own personal preference is to use single point only, unless I have very good reason to change and then I normally go for 9- or 21-point dynamic. Single point focus allows me to decide where focus should be  with NO interference from the camera. I will only switch to 9- or 21-point dynamic if I plan to shoot moving targets such as birds in flight.

I  suspect that Dynamic focussing underwent subtle tweaking in it’s behaviour in the D800 – slightly different from how it behaved in the D700, and something that I will need to investigate further. The D800 appears to employ the neighbouring focus points much more enthusiastically than the D700, thereby shifting focus slightly without the user noticing. This may be fine and desirable when shooting a moving subject, but may cause slightly soft images when shooting a stationary subject.

The AF-ON technique described above is certainly not the alpha and omega in focussing techniques, but has proved to be exceptionally valuable to me. Since using it my rate of sharply-focussed keepers has increased noticeably. I do not stand perfectly still while shooting, and using AF-C compensates for any movement from me (slight forwards and backwards swaying), as well as any movement in the subject. That means that I have very good focus at exactly the moment the shutter is released. It has also been a real help when shooting weddings or other events when I simply do not need the extra distraction from having to figure out focus settings or options.

[Updated 30/1/2013]  Do not underestimate the value of using AF-C for achieving sharp focus. Since the D800 has such tremendous resolution the slightest movement of either yourself or your subject once focus has been locked will stand out like a sore thumb. D800 focus accuracy is probably no different than lower resolution cameras, but viewing your images at 100% shows up soft focus much more clearly. AF-C (provided AF-ON remains pressed) will enhance your chances of having excellent focus at precisely the moment the shutter is released. THIS is the single most important reason why my ratio of  sharp images has increased tremendously after I started using this focussing technique – it might just do the same for you!

An additional benefit is that the D800 will activate VR (vibration reduction) when AF-ON is pressed, giving the VR system some opportunity to settle while you are focussing and thereby increasing the chance of getting a sharp image. The D700 only activated VR with a half-press of the shutter release, which was a bit bothersome to me.

Although I described how to set up the D800 the same principle can be applied to other Nikon bodies that has the AF-ON (or AE-L/AF-L) button. Careful study of the user manual will tell you how to accomplish the same goal even though the actual buttons and custom settings will be different. Don’t be afraid to experiment!

By now you are probably wondering what the downside of using this method might be? I know of three relatively minor ones:

a.) Using AF-C disables the usual focus confirmation beep  that you might be accustomed to.

b.) AF-C also disables the focus-assist beam. This does not bother me because the D800 (like the D700) can focus in pretty dark conditions and I rarely need focus-assist.

c.) If you hand your camera to someone else to use you will need to tell them to press the AF-ON button to focus.

[Updated 16/5/2014] Final tip: Firmware release 1.10 allows you to reassign the Movie Record Button in stills mode to do something else. What I found to be particularly useful is to assign the Movie button to ISO, which allows you to change your ISO in exactly the same way as the normal ISO button on the left side of the camera. However I found that I can change ISO now much faster because I do not have to use my left hand to do so, it is a much more comfortable way of working.  This is done by setting custom function f13 to “ISO”.

I consider this post as a work-in-progress as I am sure some tweaks, changes, or corrections might be necessary when I start getting feedback from fellow photographers.

Please feel free to give me your feedback below. If this technique is working for you I would like to know – if not or you found some errors in my text, be gentle with your criticism !