Barging and wine tasting in France 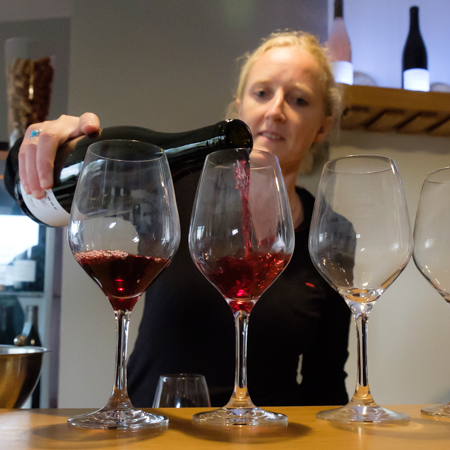 France is probably still reeling from the onslaught of 24 enthusiastic South Africans who literally barged in for a week of wine tasting  in the upper Loire valley. Not convinced? Well consider this – take a bunch of wine lovers on a week long barging trip on four barges, in a beautiful region of France, and add a brilliant French wine-tour guide that knows her stuff and have all the right connections, and you have the recipe for terrific fun!

This tour was the result of many months of painstaking planning and preparations by Björn and Cobie van Oort, and got on the way on a somewhat cloudy and rainy day one Saturday afternoon in September.

The starting point was the little village of Decize (roughly 250km south-east of Paris) and the end point was Chatillon sur Loire, with many interesting stopovers in between on the canal that follows the beautiful Loire river through regions like Pouilly and Sancerre, well known for their excellent wines. 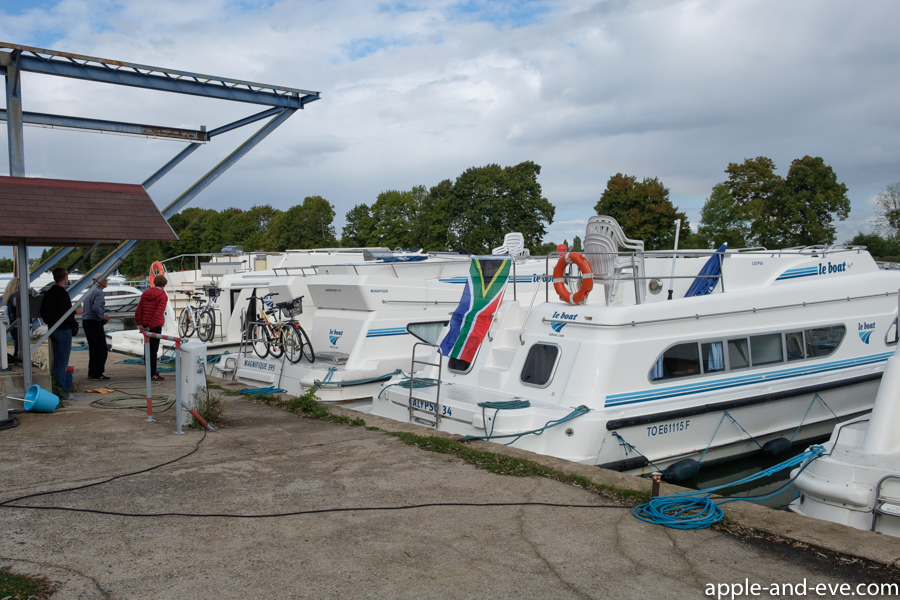 Our boats being prepared before our departure. (Fujifilm X-T2)

After a quick cruise around the harbour to familiarise us with handling the boats we were ready to start our barging. 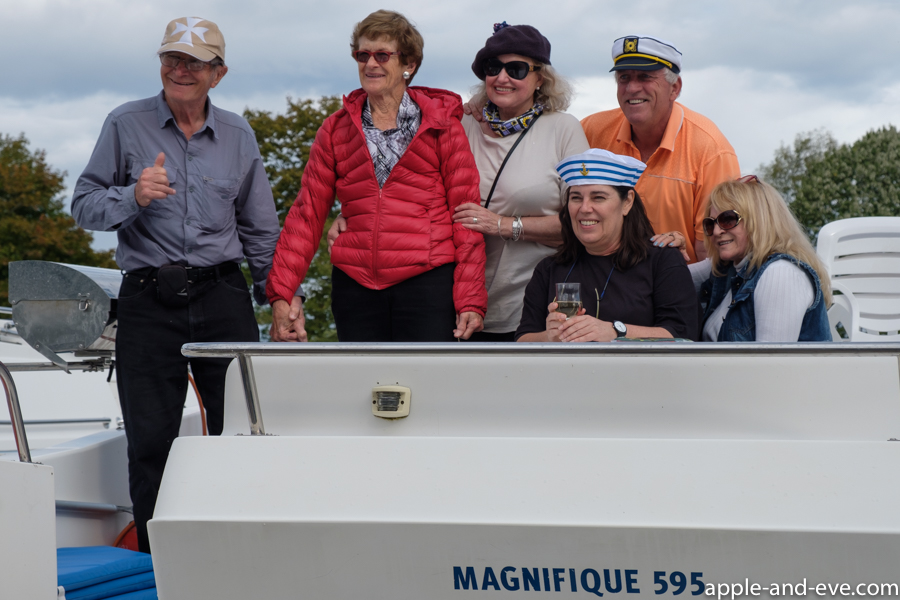 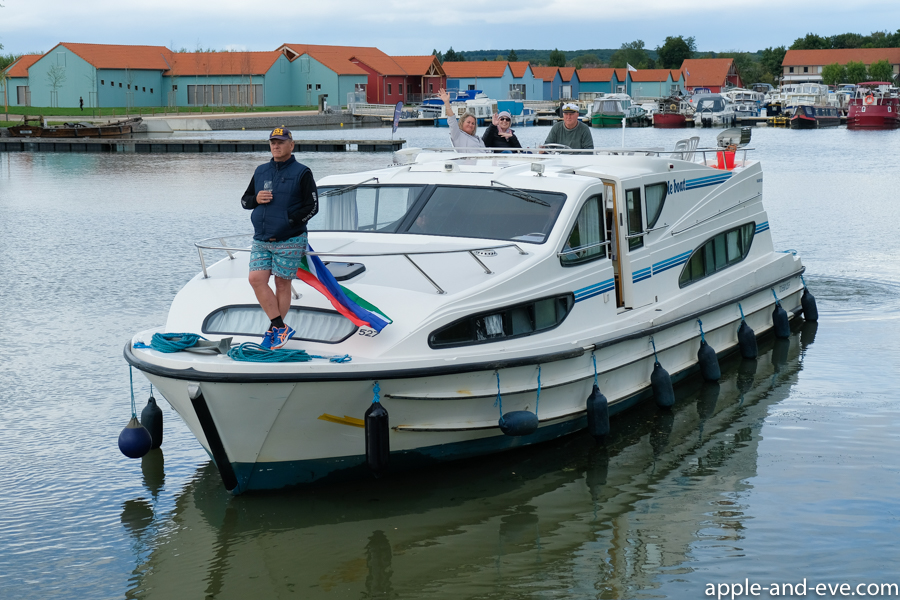 Here we go, heading for the first of many canal locks. (Fujifilm X-T2)

Our route was from Decize to Châtillon-sur-Loire, which would take us through some of the worlds most stunning wine regions, known mainly for excellent Sauvignon Blanc, some Chardonnay, and Pinot Noir.

The total distance to cover was quite short and we had a full week to do it in, which gave us plenty of time to cruise at a leisurely slow pace, visit some villages along the way, and most importantly – to visit wineries and taste wine.

The map shows the route by road, which follows the canal and river closely.

The first couple of days were spent mostly cruising and sightseeing, while savouring the fine food and wines of the region that we acquired before our departure.

Each boat was equipped two bicycles for the occassion when someone wanted to pedal into a village for bread or supplies. (Jaunine – Nikon D750) 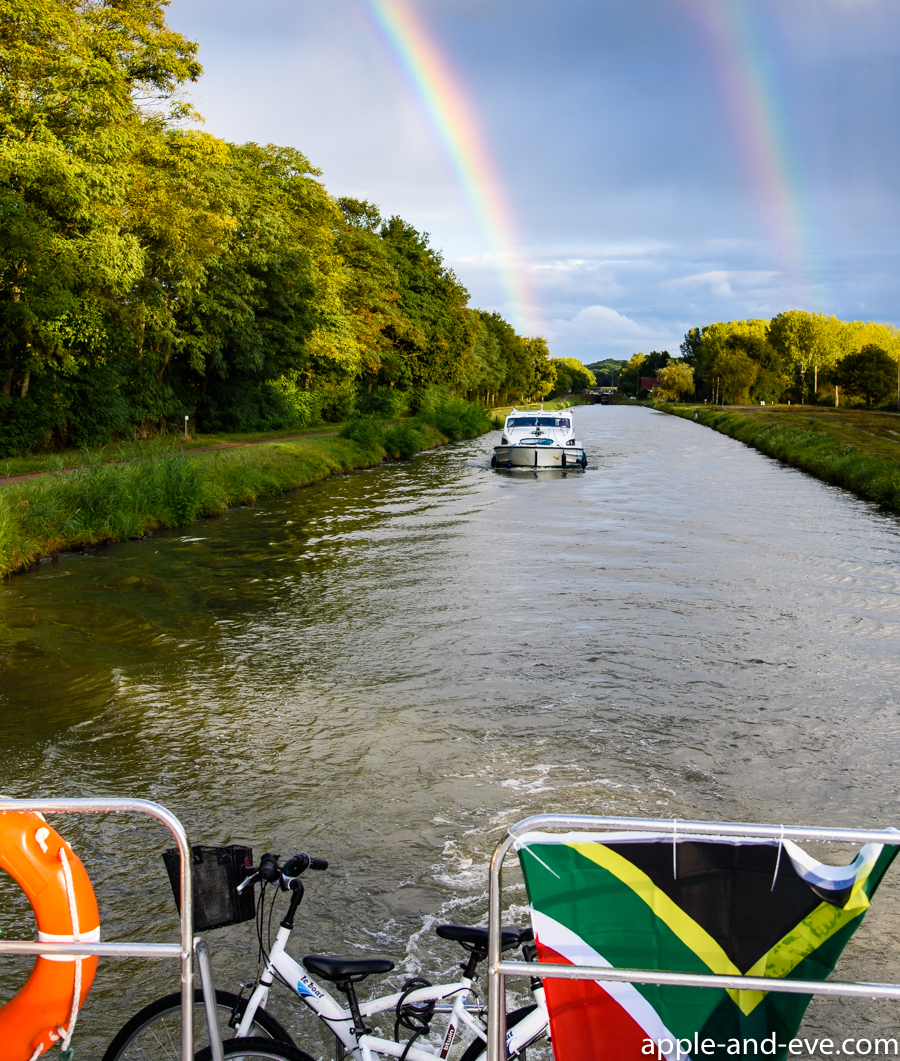 The canal was peppered with many locks to pass through and equally many bridges, some of them so low that you had to duck your head when passing through. 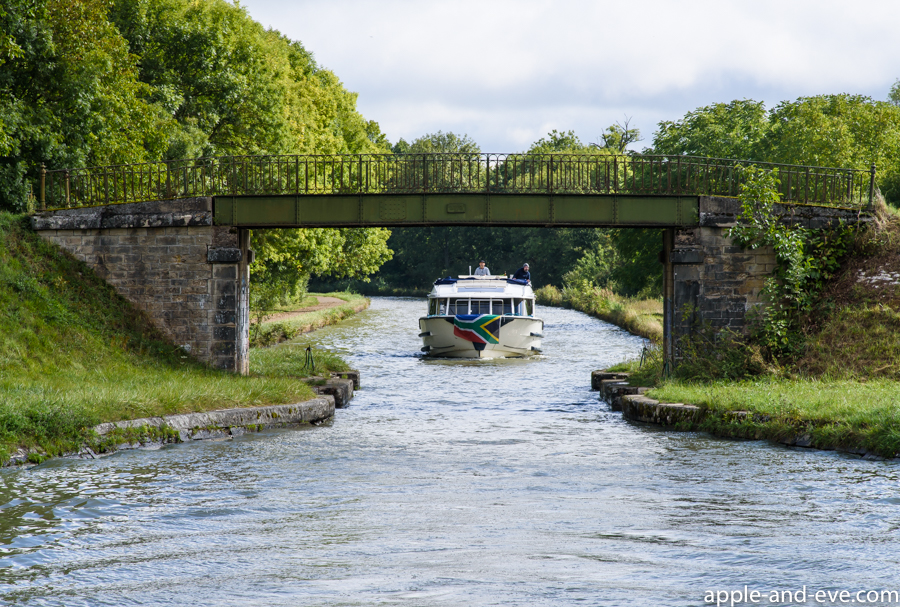 One of many bridges over the canal, and quite narrow! (Jaunine – Nikon D750) 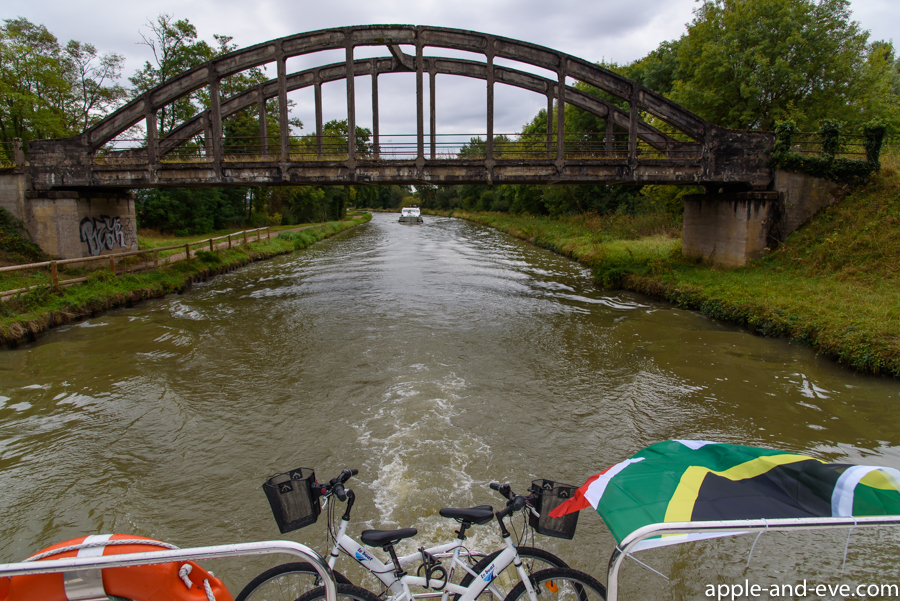 We eventually met up with Laure, our wine guide en route, and she went to great lengths explaining to us the intricacies of the winemaking in the region. Laure turned out to be worth her weight in gold as she was extremely knowledgeable and entertaining –  http://www.vinitour-centreloire.com 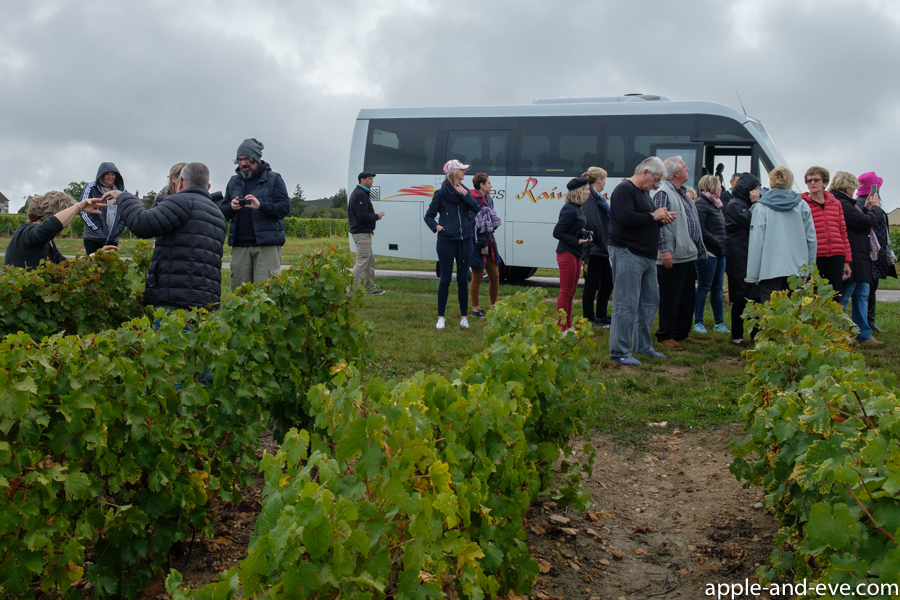 The group during one of our many visits to vineyards. (Fujifilm X-T2)

Unlike South Africa, where most wine farms and wineries are used to receiving visitors and are open for wine tasting, France does not appear to be geared for this. It was therefore a good thing to have a guide with the right connections. Many of the wineries that we visited would simply have been off-limit to us without a good guide, especially since it was harvest time and without doubt the worst time for wineries to receive visitors.

One such winery was the magnificent Domaine de Ladoucette. It was truly a privilege to be able to wander the vineyards, the château gardens, and to taste wines here!

Laure holding up a bottle of Pouilly Fumé. (Fujifilm X-T2)

Björn in his element with Koos in the background. (Jaunine – Nikon D750)

Exploring new wineries and wine was made even more enjoyable due to the fact that we travelled mostly by boat from village to village, stopping at various places to explore by foot or bicycle, or simply mooring along the canal bank to stay overnight or have a break. Nobody was in a rush and the beautiful scenery all around us all added to the fantastic experience.

Each boat had an assigned ‘captain’, but in practice anyone that felt like it could take over piloting duties, or helped with navigating the tricky locks, and doing the rope work.

The locks are generally quite narrow and can accept a maximum of two boats at a time, so it was a slow process to get four boats through a lock.  One particular lock was very interesting – it was approached over a bridge (by boat!) and was a double lock, meaning two locks in tandem.

Approaching the bridge over the Loire river with Barrie piloting, with the double lock at the other end. (Jaunine – Nikon D750) 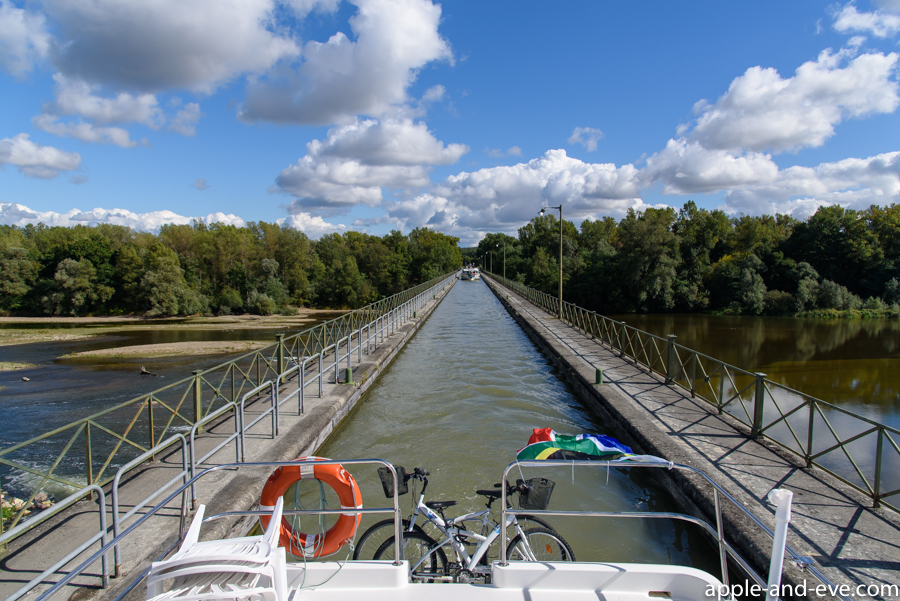 Crossing the Loire river over a bridge by boat! (Jaunine – Nikon D750) 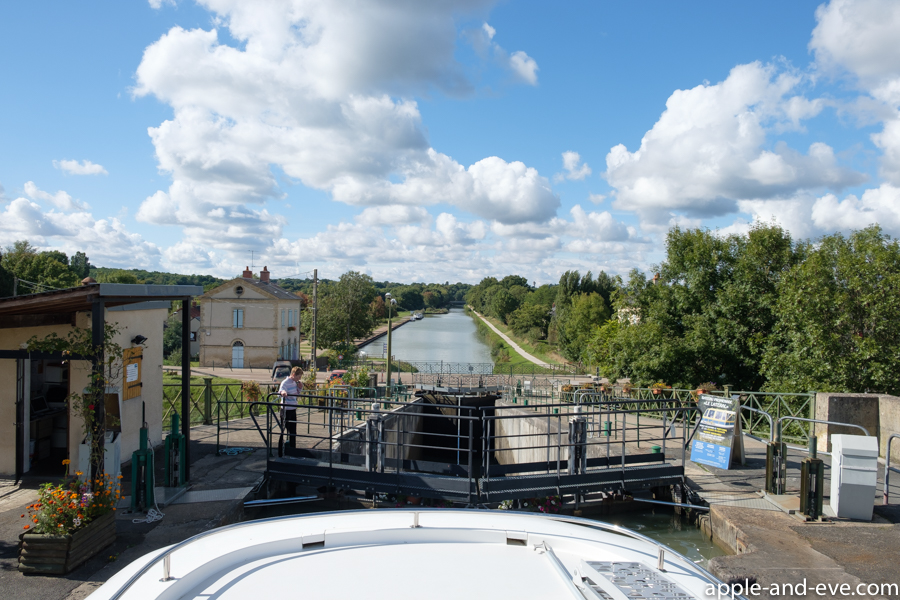 Into the first of the double locks. (Fujifilm X-T2) 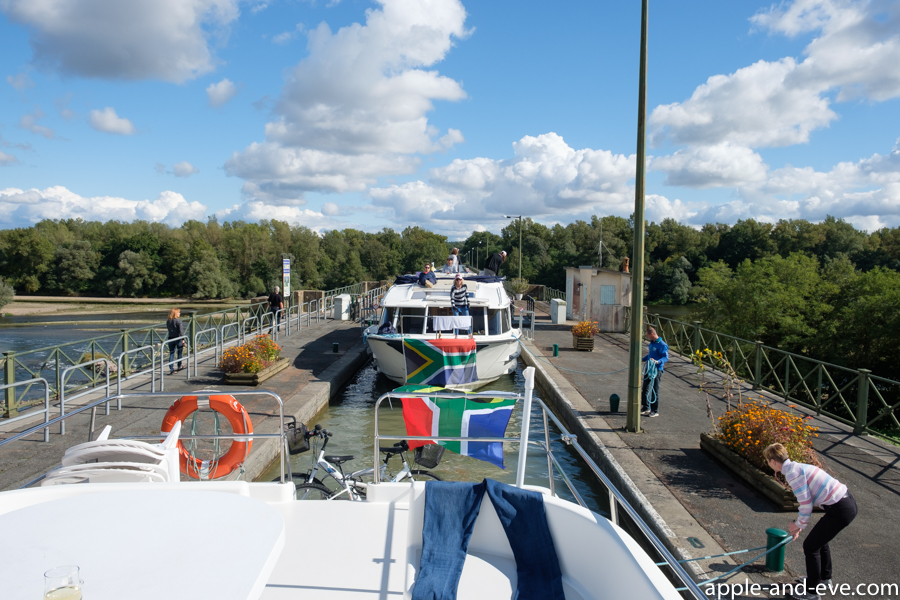 The second boat now also in the lock. (Fujifilm X-T2) 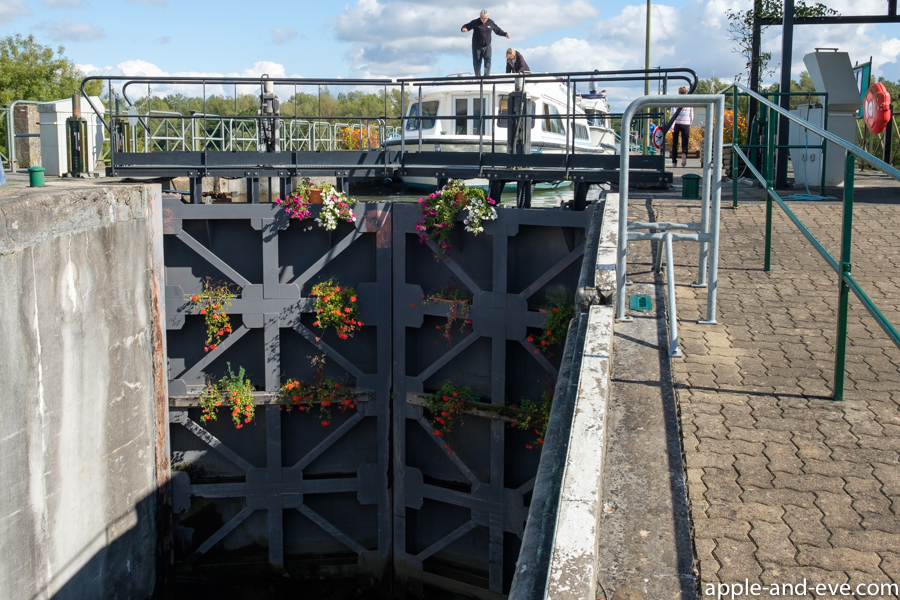 Two boats in the lock, ready for the water to be pumped out. Notice the pretty flowers on the lock doors. (Fujifilm X-T2)

The lock emptying with some spectators watching. (Fujifilm X-T2)

One such winery is Joseph Mellot, which is a family-owned winery more than 500 years old, famous for being the wine advisor to Louis XIV – quite astonishing!

Some of the wines at Joseph Mellot. (Jaunine – Nikon D750)

Visiting and tasting the wines of such an old winery is something new and very special to us South Africans, coming from a country where the wine industry is far younger. 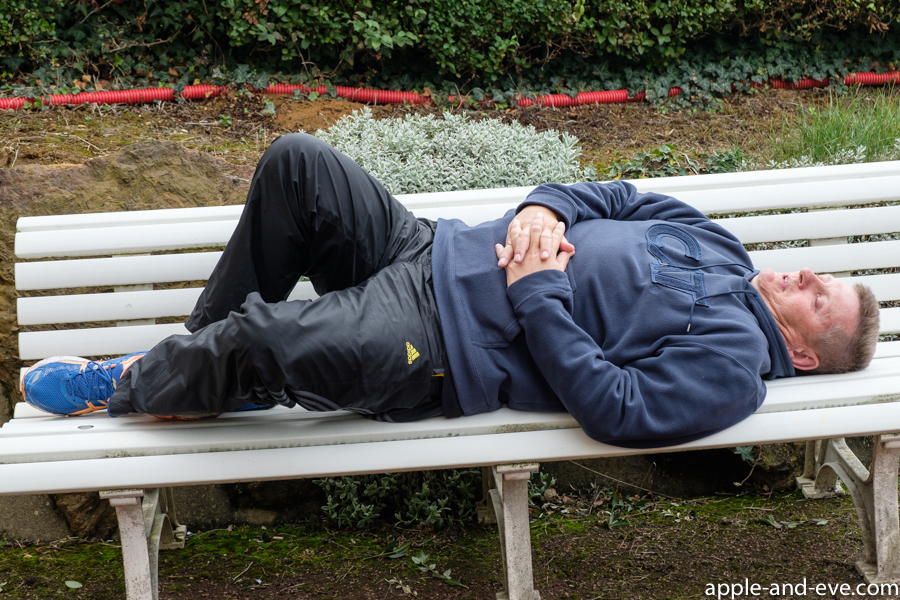 After Joseph Mellot more wineries followed and we continued to be impressed by the French. 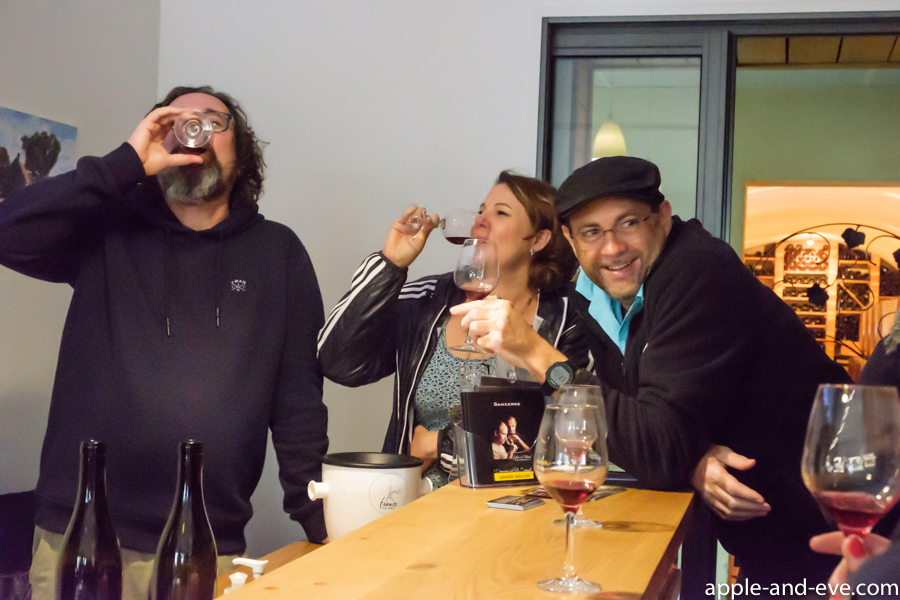 Since it was harvest time and the wineries were extremely busy it was a rare privilege to be allowed into the cellars to witness grapes being prepared and wine made. (Jaunine – Nikon D750)

In between visiting wineries and villages we were responsible for sourcing our own supplies for making food, etc. On one such occasion it was decided to despatch one of the boats on a mission for finding supplies. Each of the four boats nominated delegates to accompany this important mission and soon a boatload of delegates sailed off into the setting sun in search of supplies. This almost turned into a mess-up of note since the delegates continued their wine-tasting while en route and got lost on the canal in the process. You may wonder how it is possible to get lost on a canal with no detours, but trust me it happened quite easily. Everyone lost track of exactly where  we were, resulting in us barging up and down the canal in search of the elusive supermarket before closing time. We eventually found it at dusk, but only after making up a haphazard emergency plan to protect us from our irate and hungry  shipmates in case we cannot find it!

Björn, our fearless leader, stares at the shopping list while coming up with an emergency plan (excuses) in case we cannot find the supermarket 🙂 (Fujifilm X-T2) 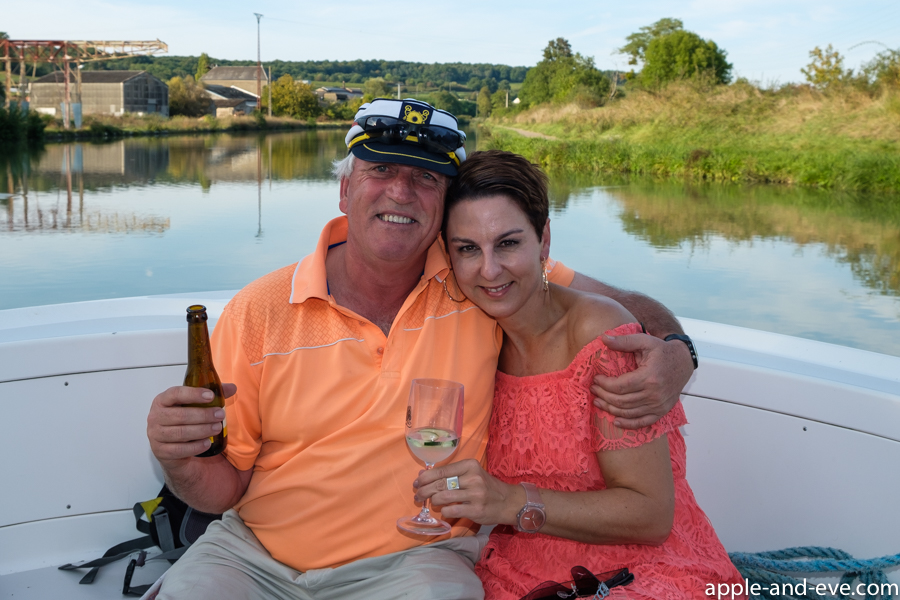 With the shopping list sorted out, Björn could relax a bit in the company of Daphne while were were still searching for the supermarket, which was eventually found. (Fujifilm X-T2) 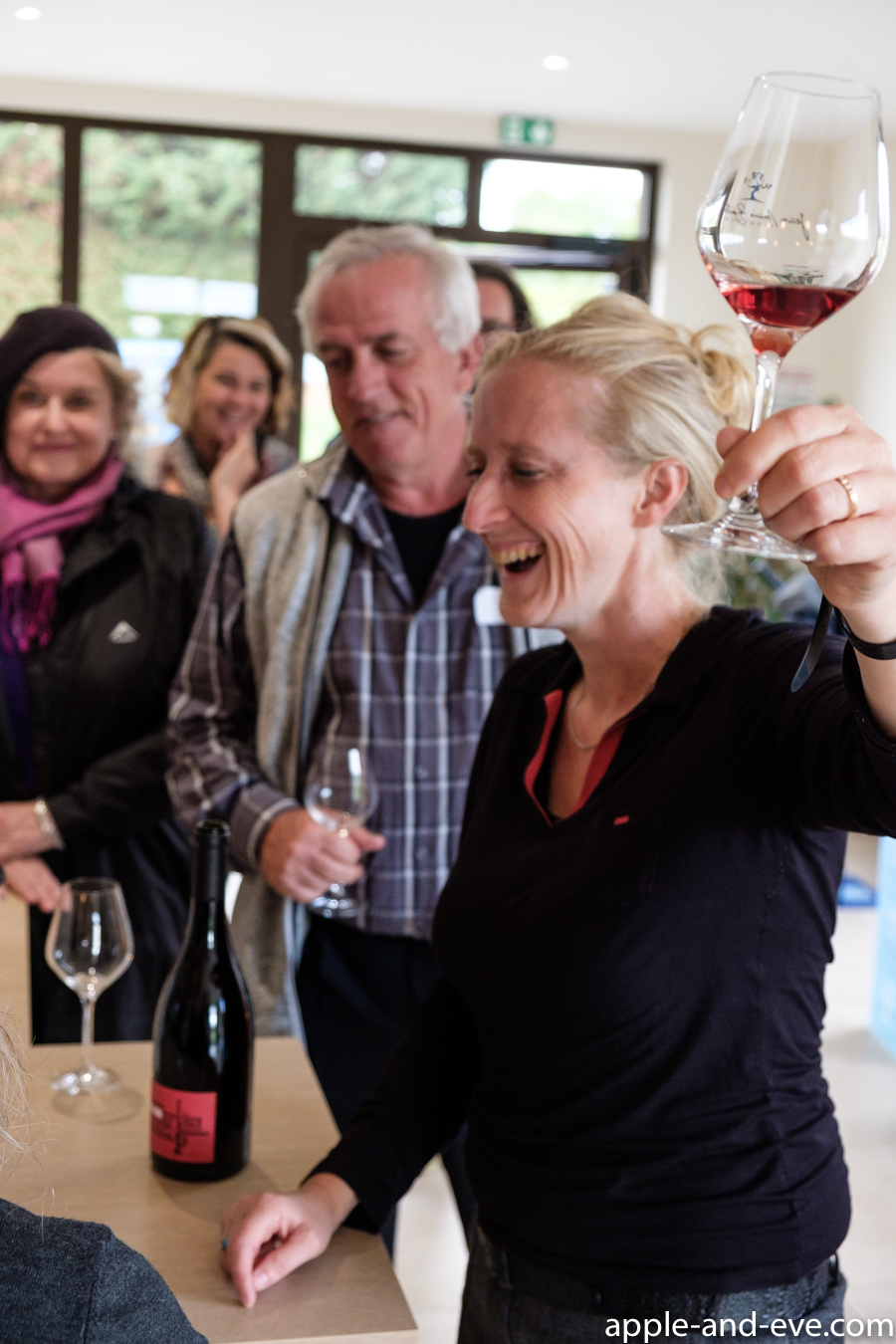 Another wine to taste. (Fujfilm X-T2) 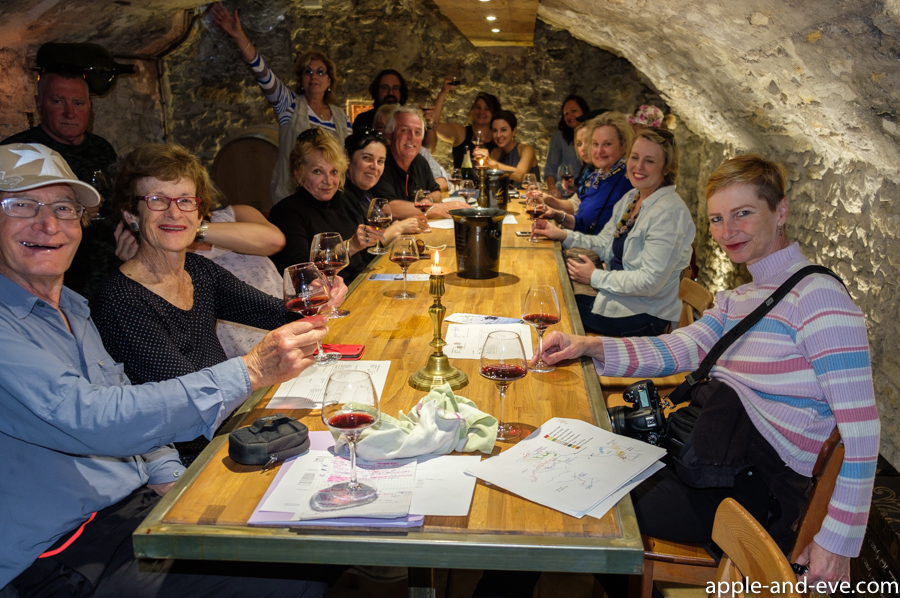 Taking a break in the small village of Sancerre. (Jaunine – Nikon D750) 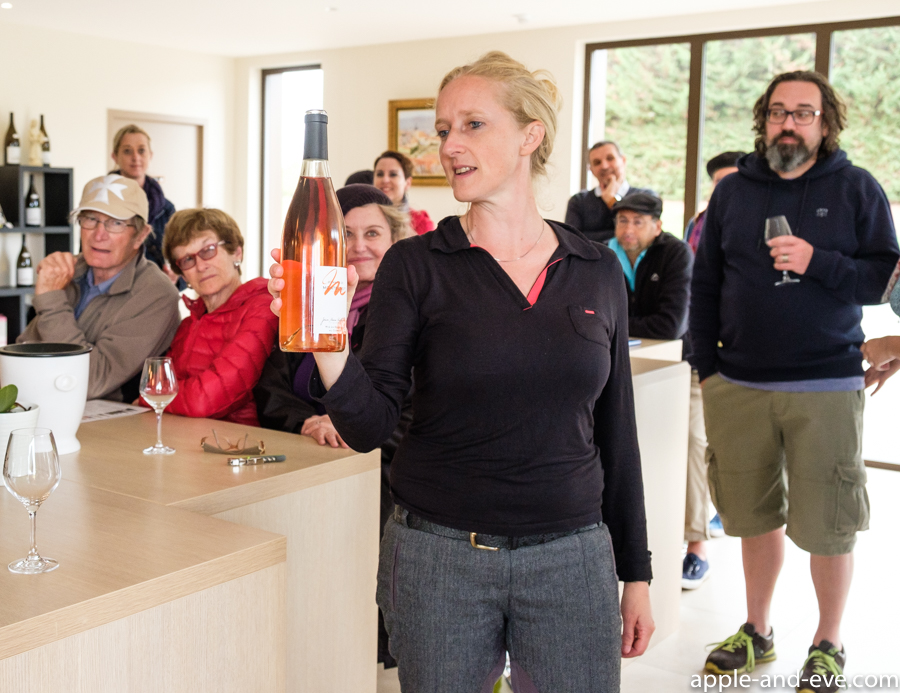 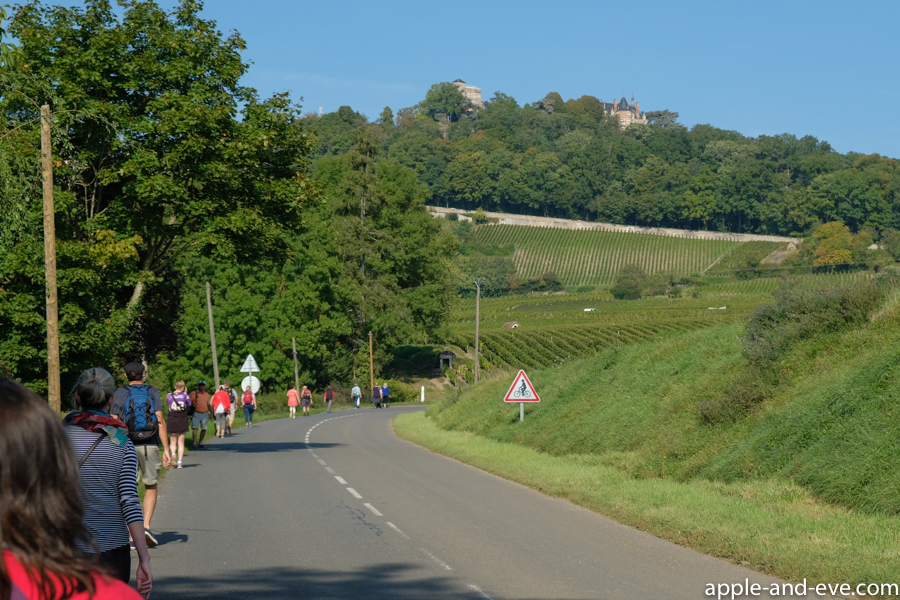 The group in single file on our way to a winery by foot. (Fujifilm X-T2) 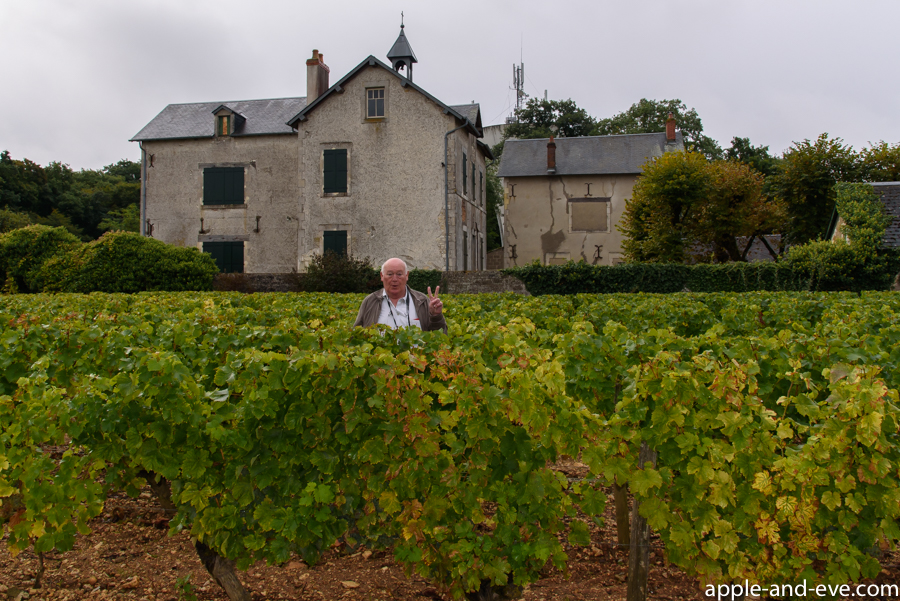 Jaunine caught me here in the middle of a small vineyard and insisted that I include the image on this blog. (Jaunine – Nikon D750) 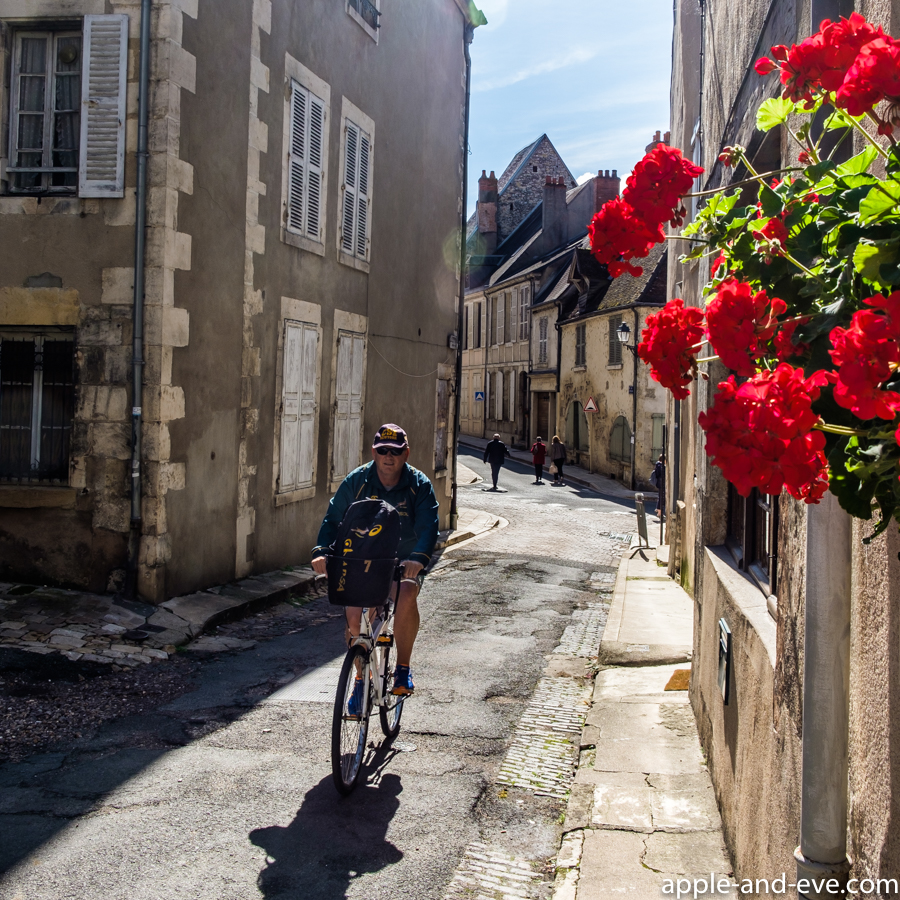 Chris carting wine bought from a winery back to the boats. (Fujifilm X-T2) 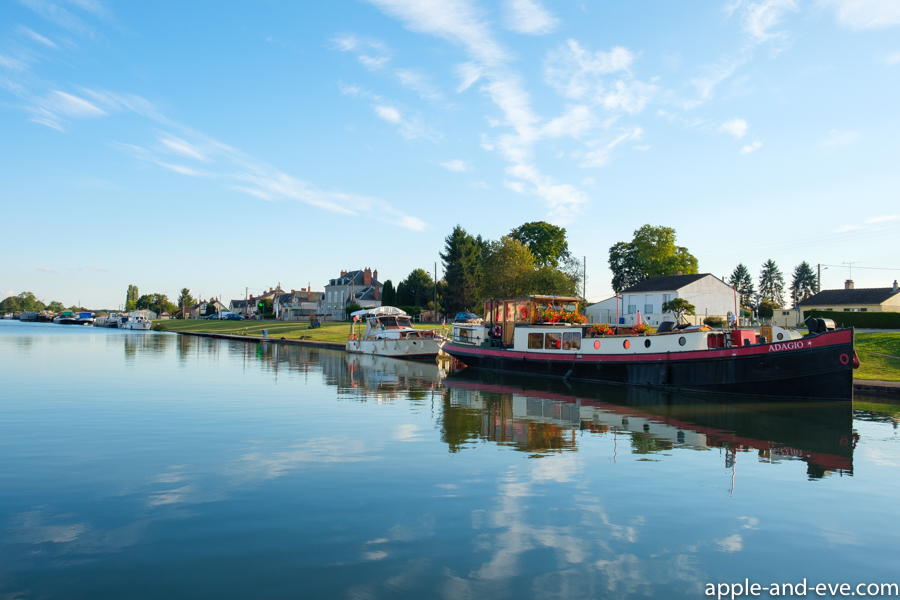 The scene at one of our mooring points. (Fujifilm X-T2)

Sadly our tour came to an end all too soon, and the time approached to take our leave from this beautiful part of the world, but not before we had a fantastic meal on our last evening on the canal – expertly prepared by Ronel, who really spoilt the crew on our boat with her magnificent food. 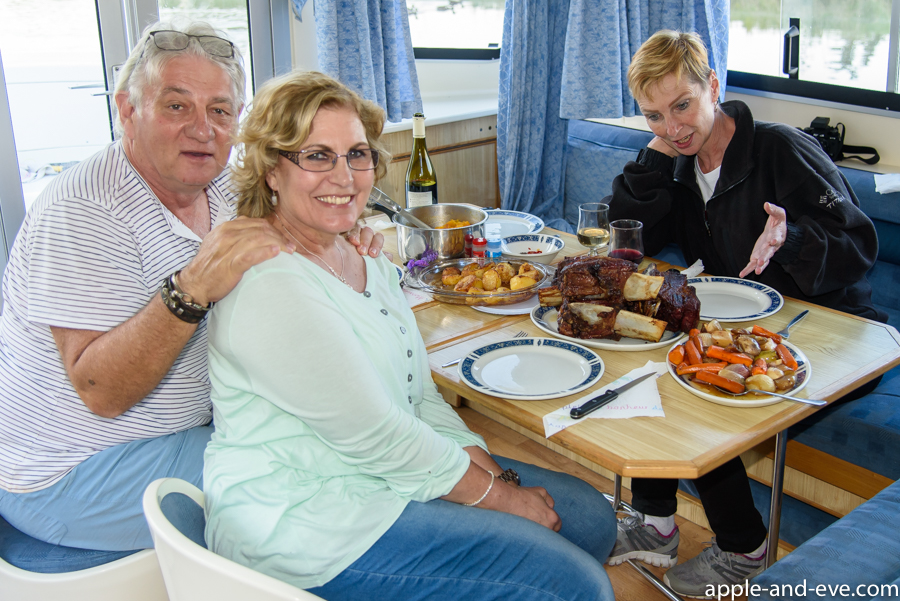 Barrie and Ronel our shipmates, with Jaunine being gobsmacked by the feast that Ronel prepared. (Nikon D750)

A last look at the maginificent scenery around us before leaving. (Fujifilm X-T2)

This was really a magnificent tour which ended all to soon, but I’m sure not a single one of the group will forget our shared experiences in a hurry, so maybe another tour like this in future should be considered!

It was a somewhat subdued group that reluctantly left the boats a week after our start. Some were heading back to South Africa via Paris, some continued to other parts of the world, and Jaunine and I headed out to Alsace and Germany – watch this space for more to come later !

As usual, feel free to post any comments or suggestions below 🙂

← A day in Paris
Fairytale Alsace →