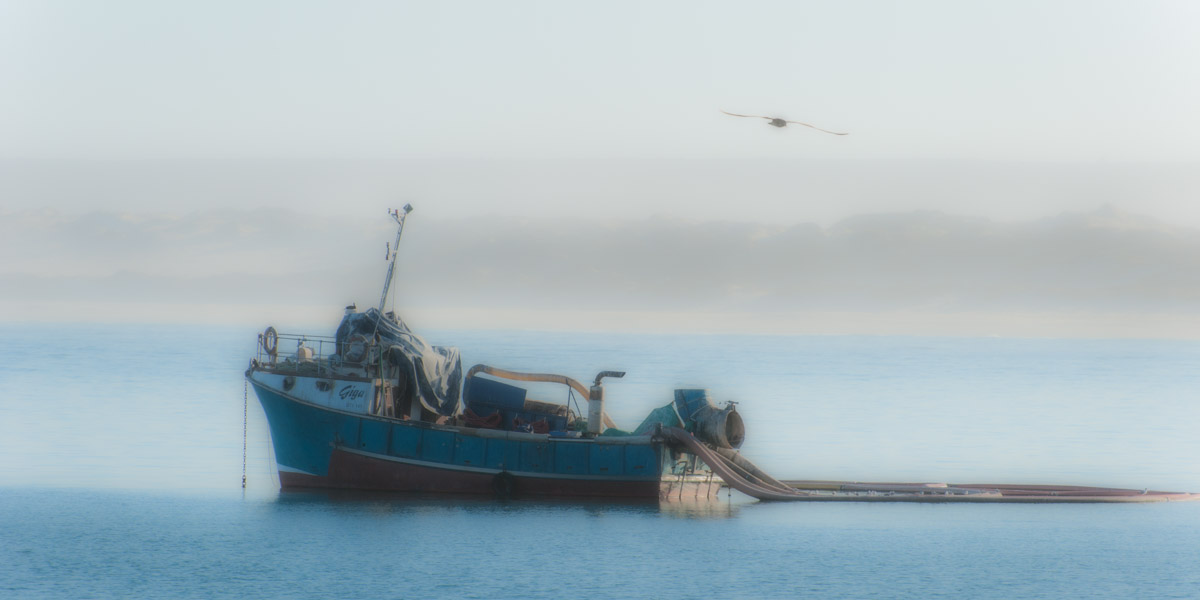 Ancient ruins are normally associated with Greece and Italy (Rome) and few people are aware that some of the most spectacular and important ruins are actually found in Turkey.  A visit to Turkey is not complete without visiting at least some of these sites. Such a visit was indeed pretty high on our list of priorities when visiting Turkey – and we were not disappointed.

Our first site to explore was Ephesus, which is perhaps the most popular and well-known site. We were fortunate in the sense that we got there early morning and out of season, meaning fewer visitors and less crowding. That gave us the opportunity to take our time and make the most of it.

The library at Ephesus is probably the highlight and certainly a “wow” moment, but certainly not the only part to see. The site is still being excavated and new discoveries are made continually. We were surprised by this, but also happy to see new sections being readied for public viewing.

One of the first sights when entering Ephesus is this spectacular view with the famous library in the distance. 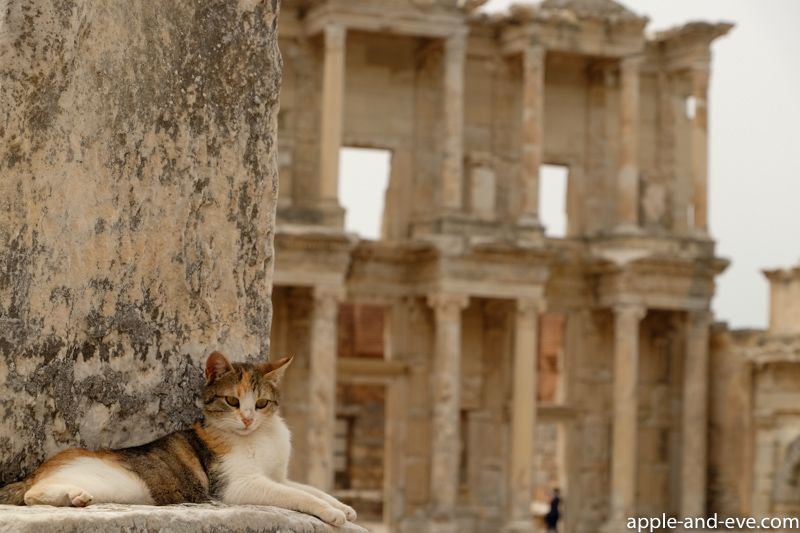 Another surprise was to see the relief of Nike, the winged goddess of victory. She holds a wreath made from laurel leaves, an emblem of victory, in her left hand, and a stalk of wheat in her right hand; she is in a flying position. This comes from the Roman period and was discovered among the ruins on the Square of Domitian. Rumour has it that the “tick” mark made by her cloak-like wrap in the lower left-hand side (just below her right hand) has been adopted as emblem by Nike, the well-known sports-goods company.   See below.

Nike, the goddess of victory.

Something equally interesting albeit less glamorous were the public toilets 🙂  These were really public, consisting of rows of toilets arranged in a square, facing each other. At the bottom there was running water to wash away the waste. The so-called “best seat of the house” was the toilet closest to the point where fresh running water entered the facility, since that would be the place where the stench would’ve been least. 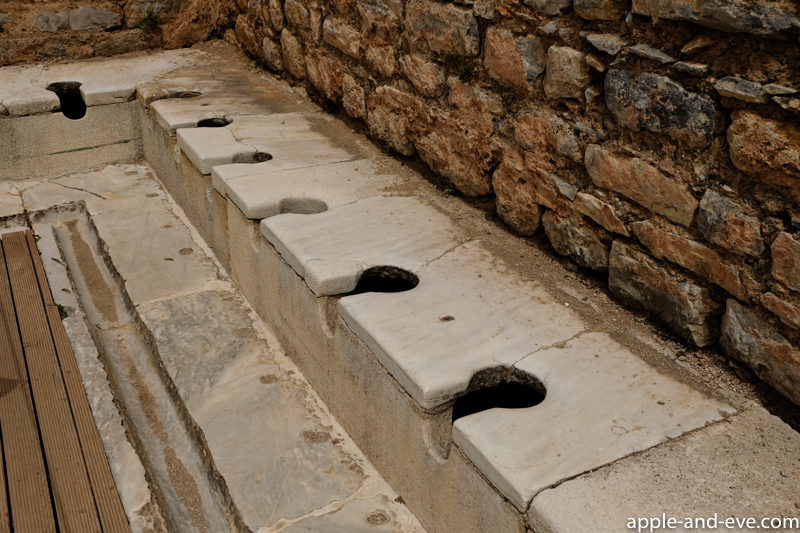 Best seat in the house!

We enjoyed Ephesus and am curious to see what else might be unearthed with the ongoing excavations. Much of Ephesus got covered with dirt and mud over the years, and who knows what surprises might be revealed there in future! 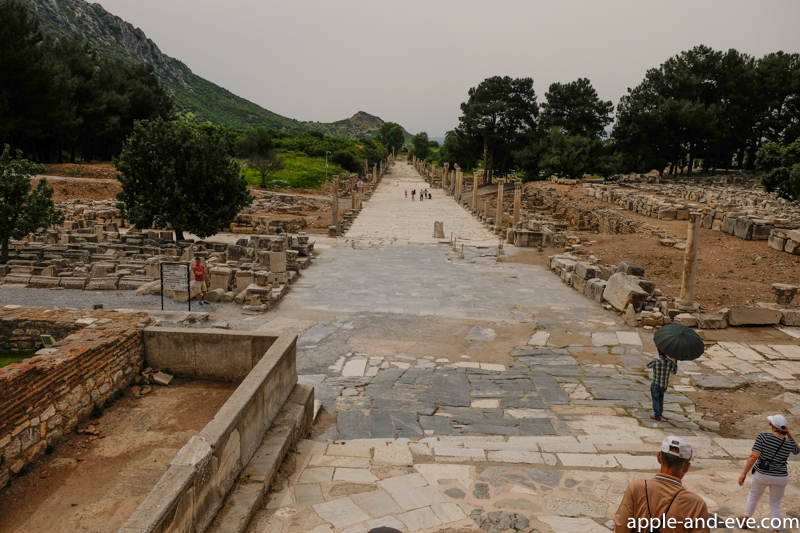 At the end of the 2nd century B.C. the dynasty of the Attalids, the kings of Pergamon, established the thermal spa of Hierapolis – our next stop. Hierapolis was an ancient city located on hot springs in classical Phrygia in southwestern Anatolia. Its ruins are adjacent to modern Pamukkale in Turkey. Deriving from springs in a cliff almost 200 m high overlooking the plain, calcite-laden waters have created the Cotton Palace, an unreal landscape made up of mineral forests, petrified waterfalls, and a series of terraced basins.

It is said that Cleopatra visited Hieropolis and was very much taken by the hot springs. There are even pools called Cleopatra’s pools, named after her. I can not help but wonder if Anthony joined Cleopatra here on occasion, since it is close to Side, the city believed to be where they first met. 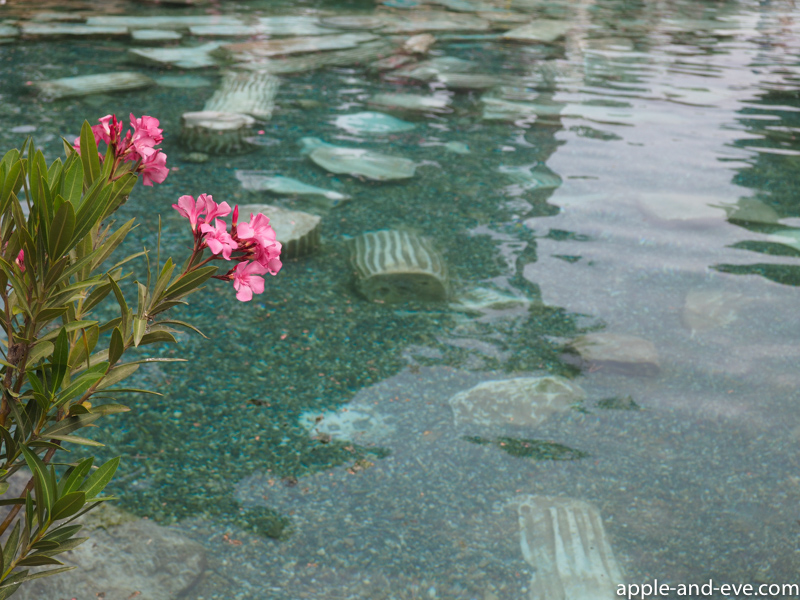 In addition to the Cotton Castle and Cleopatra’s pool, there is also an impressive amphitheatre to be seen. In the distance towards the mountains one can also see tombs. The whole area is now a UNESCO world heritage site.

Unfortunately we did not have enough time to visit the huge museum that is on site.

The impressive open-air theatre at Hieropolis.

Perge (Perga in Greek) was once a very important city in the region of Pamphylia and the ancient ruins of Perge is located about 18 km east of Antalya near the town of Aksu on the Mediterranean coast. Perge was a wealthy Greek city during the Hellenistic period, however, when the whole bay area silted up, that ended Perga’s port city status and sea trade.

According to the Acts of the Apostles, St Paul and his companion St Barnabas visited Perga twice in 46 AD and St Paul also delivered a sermon here. During the reign of Constantine the Great, Perga became an important centre of Christianity and it remained so through to the 6th century. 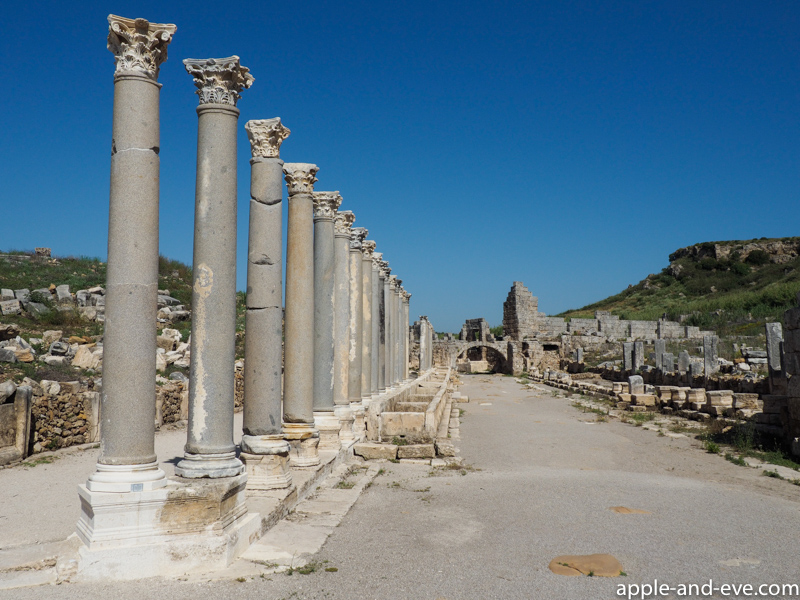 The ruins at Perge.

Entrance gate to the city as seen from inside the city.

Perge boasted an impressive complex of Roman baths which had different baths for very hot hot, and not so hot baths. The water was heated by fire from below the bottom of the baths with an intricate network of channels and chimneys. 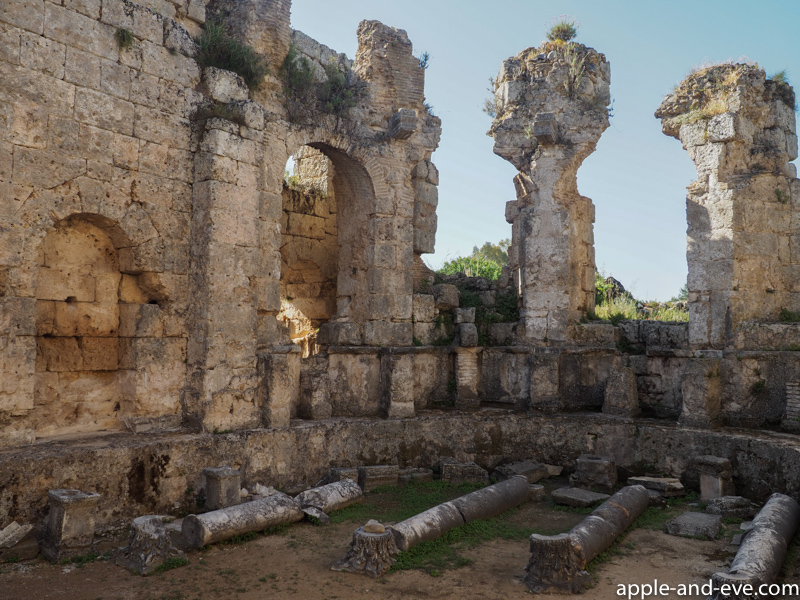 Some of the baths

A short distance from Perge is the city of Side, which was an important city for trade. The famous Temple of Apollo was built here. It is believed to be the place where Anthony met Cleopatra; he presented the Apollo Temple as a token of his love and devotion to her.

Even without the romantic angle, the Apollo Temple is a magnificent work of architecture dating back to 2nd century AD. What made it different from other temples of that era, is its antechamber which had a pair of massive Corinthian columns.  It was built in honor of Apollo, the god of light and music. 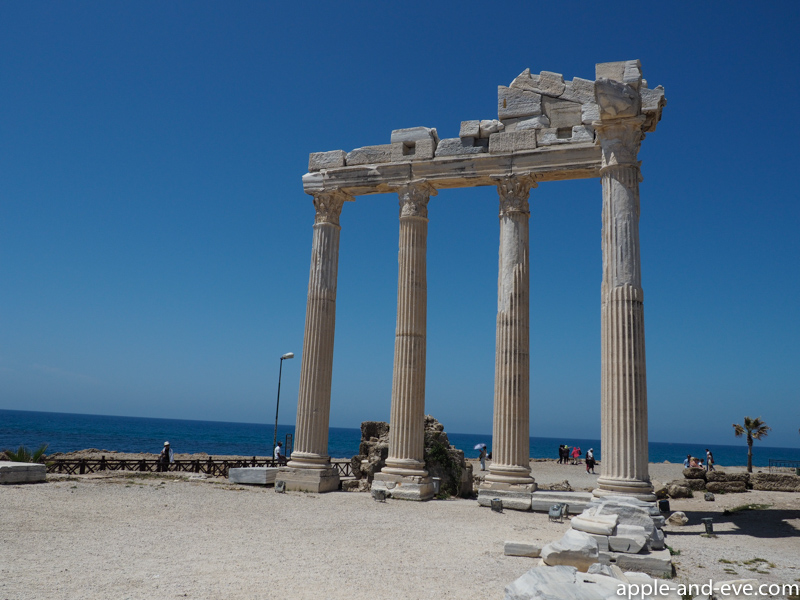 Temple of Apollo at the city of side.

Not far away from Side is the magnificent theatre of Aspendos, which is in superb condition and well preserved. The theatre was built in the 2nd century AD, during the reign of the Roman emperor Marcus Aurelius (161-180 AD), on the basis of the project created by Zeno – a Greek architect born in Aspendos. The Greek and Latin inscriptions which are place above the entrances to the skene building state that two brothers – Curtius Crispinus and Curtius Auspicatus – dedicated this theatre “to the gods of this country and to the Imperial house”.

Despite the fact that the theatre was build in the Roman period, the building displays many features typical to Greek theatres. At the main entrance to the theatre the different architectural styles are clearly visible where extensions and alterations were made over time.

The magnificent theatre at Aspendos, believed to be the best preserved ancient theatre in the world. 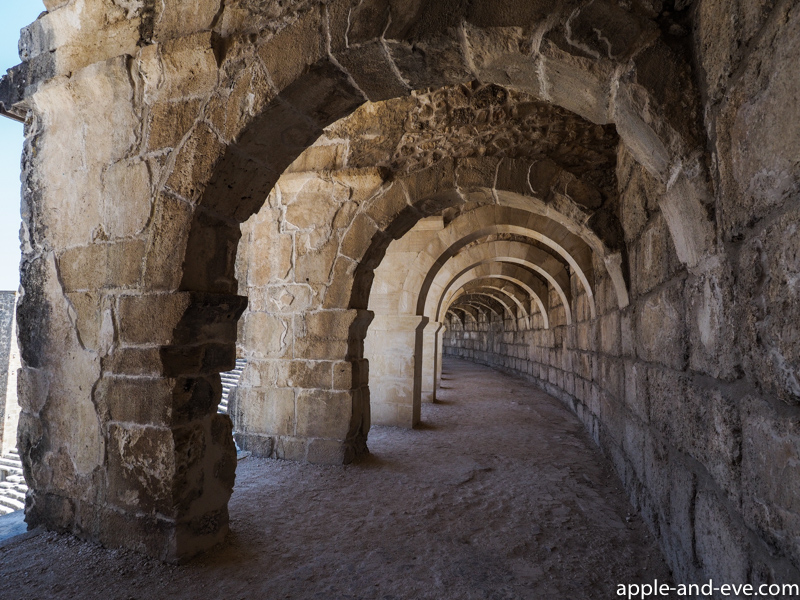 Passage at the rear and top of the Aspendos theatre

A very good example of Roman Aquaducts can be seen near Aspendos. These aquaducts were used to transport water over great distances to provide water to cities. 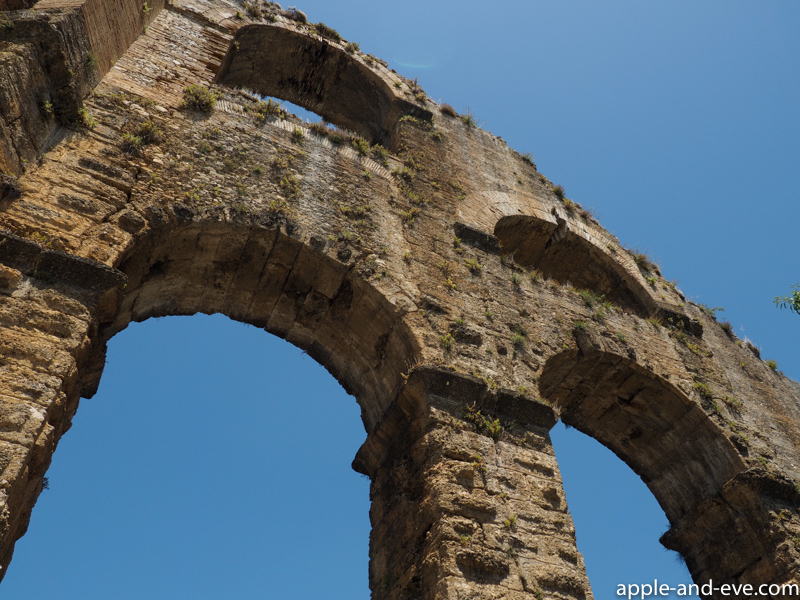 We thoroughly enjoyed visiting these ancient sites and found Turkey to be very rich in history, it was certainly worth the effort and we hope to be able to do it again.

However, Turkey has more to offer than just historical sites. It also boasts some lovely spots for a bit of R&R, such as the old town part of the city of Antalya.