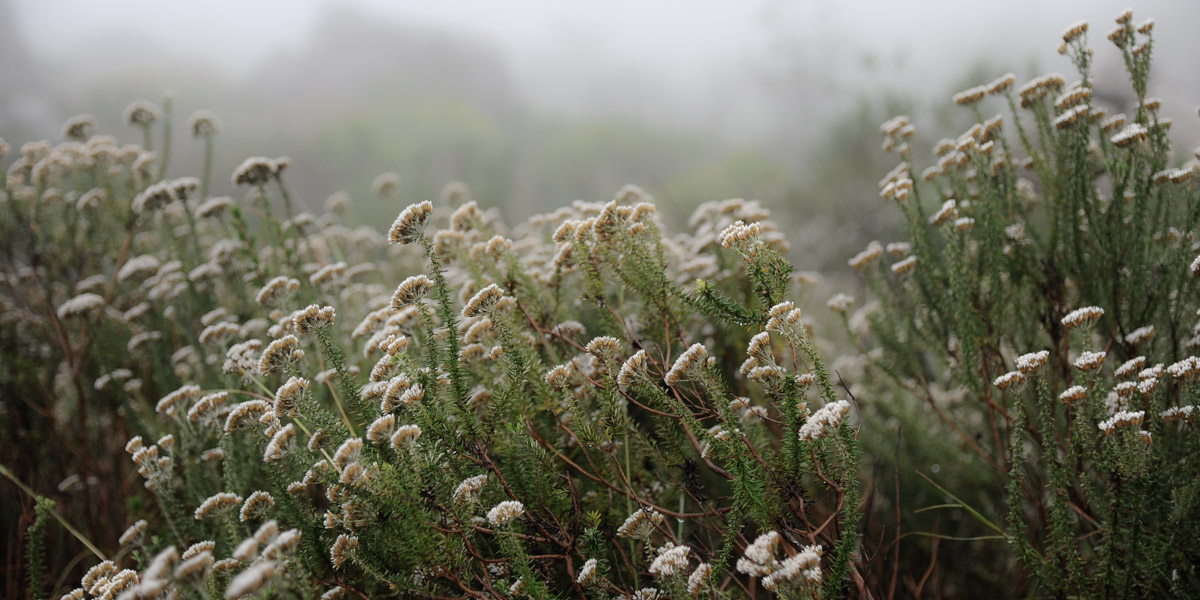 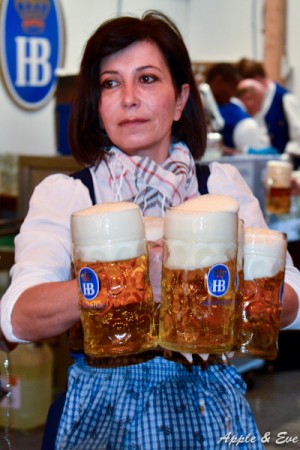 Have you ever witnessed the enthusiastic consumption of an astonishing 7 million litres of beer? Well neither have I and never thought I would… until a couple of days ago!…

The annual Oktoberfest in Münich, Germany started in 1810 and has since grown into one of the world’s most famous and best loved festivals of all time. Now I am not much of a beer drinker or enthusiast, but when the opportunity came my way of attending the 2012 Oktoberfest in Münich I simply could not resist. While helping me making travel arrangements for a short visit to Ireland to attend the baptism of Alexander, my youngest grandson, Jaunine noticed that I will be passing through Germany right at the time that the  2012 Oktoberfest will be in full swing. Not someone to miss a golden opportunity she immediately insisted that I take a “short” detour via Munich to attend this famous festival.

The “short” detour turned out to be several hours of sleepless travel by plane, bus, and trains before I eventually arrived in Munich, home to Oktoberfest. I was loaded with camera, assortment of lenses, flash, spare batteries, and other photographic paraphernalia – ready to record some amazing images of this famous event. I was after all more photographer than beer drinker, and therefore my main goal was to take photographs and perhaps have a glass of beer should I really get thirsty.

Nothing however could prepare me for what was to happen next 🙂 While heading towards the metro-train platform in the Hauptbahnhof  (main train station) I suddenly found myself surrounded by a huge, very enthusiastic crowd clearly heading towards the festival themselves. Getting onto the first available train without being squeezed into a pulp was already no mean feat, but turned out to be a minor indication of what was awaiting me… I did not need bothering getting off the train at the destination station – I was simply pushed off, and became part of a wave of raucous and cheerful bustling crowd of people pushing their way into the festival site. My direction of travel was unceremoniously dictated  by the obviously thirsty crowd heading for the first of many beer halls. 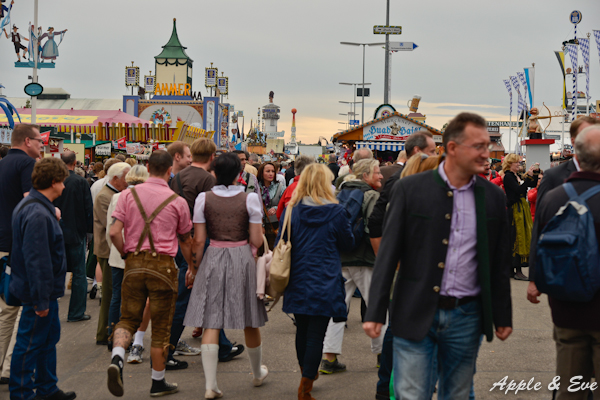 Only once you have managed to get towards the middle of the festival grounds can you come to a standstill to take a breath.

Inside the beer halls where the noise level was astronomical I was met with a sea of smiling, happy beer-slurping people that left very little room for moving about. Rows and rows of wooden tables and benches were overflowing with people,  all talking and singing at the same time. 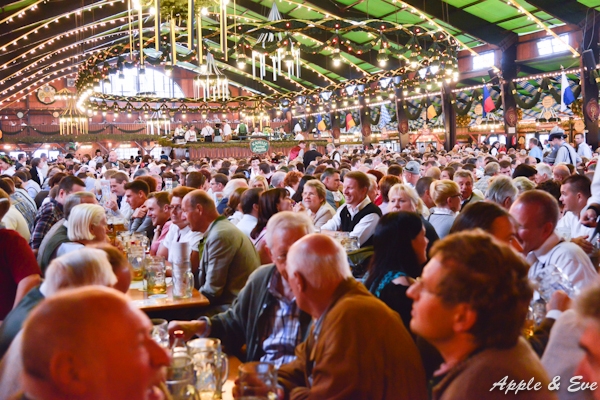 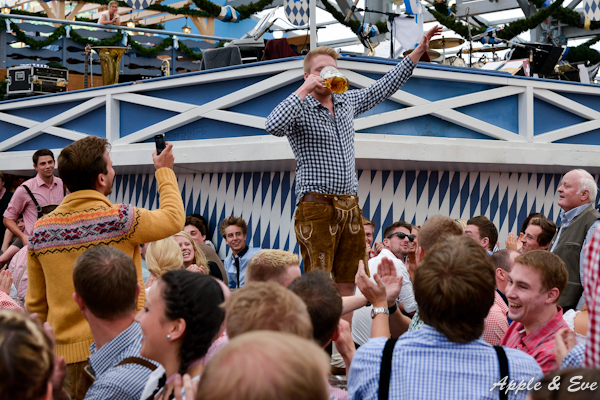 From time to time somebody will be challenged to get up onto a table and down a stein of beer (1 litre) in one fell swoop with a wildly cheering crowd offering their support. 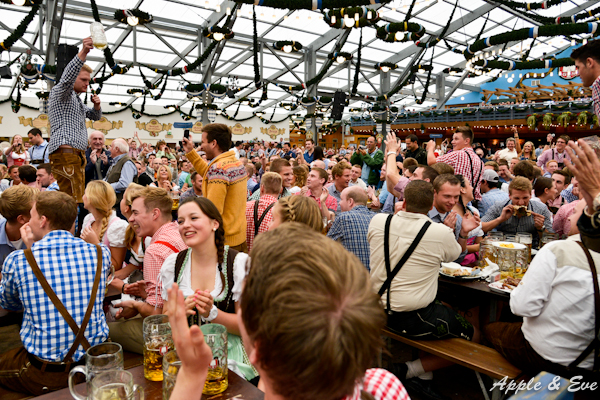 Once the stein of beer has been successfully downed, the proud drinker accepts the appreciative applause of the crowd.

Imagine moving about in this chaos carrying a big camera and lens in hand, with a backpack on your back loaded with lenses and batteries. At every turn and move I made I managed to bump into someone, invariably causing them to spill beer. It is no small wonder that I did not get thrown out.  Hats off to Bavarian hospitality ! 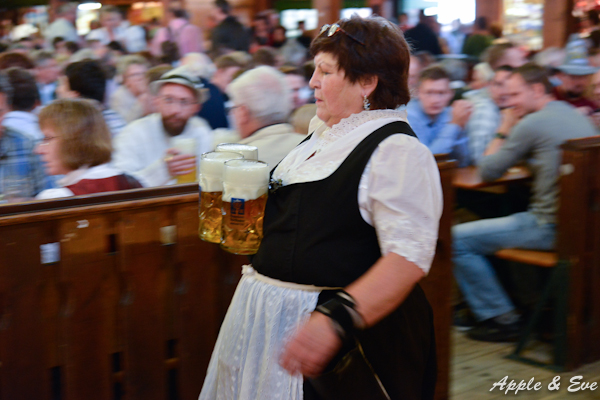 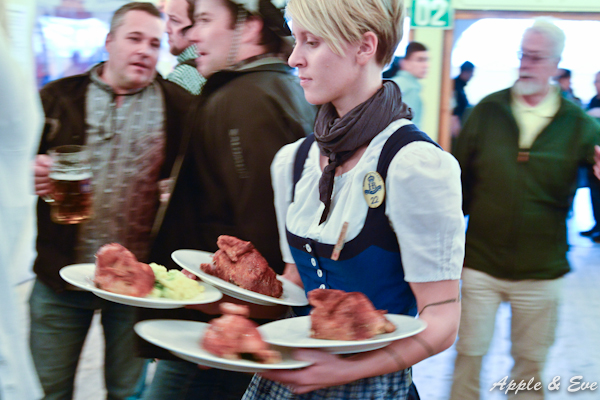 It is not just beer being consumed, traditional Bavarian dishes are also on offer. 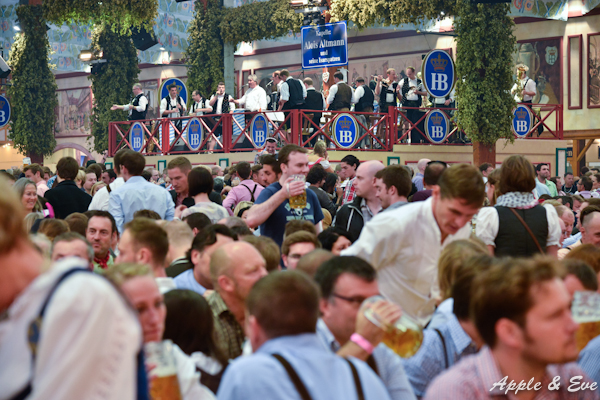 No Bavarian fest will be complete without the traditional oompah band. 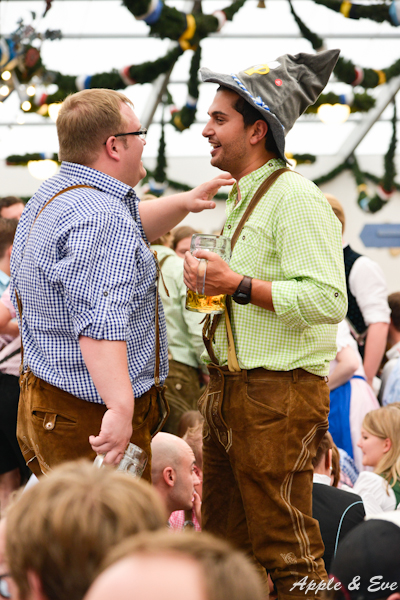 Many new friendships are formed, and old ones renewed – even if it means standing on a table!

As mentioned earlier, moving about the Oktoberfest is a difficult task at best, lugging around photographic gear in an overstuffed backpack while trying to take photographs is an almost impossible task, but I did try! 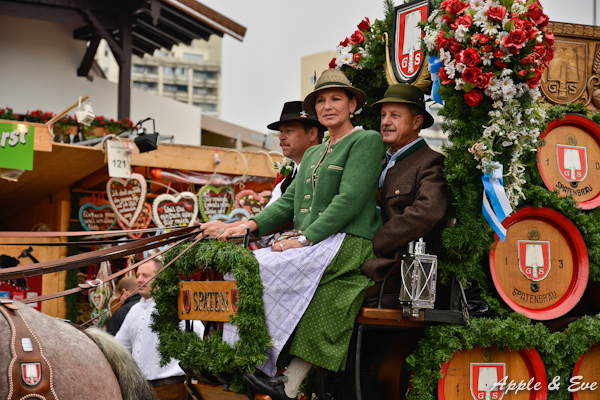 Not all the action happened in beer halls, outside was an equal flurry of activity. 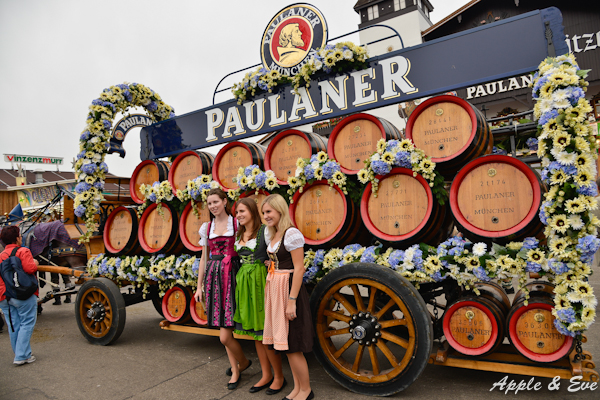 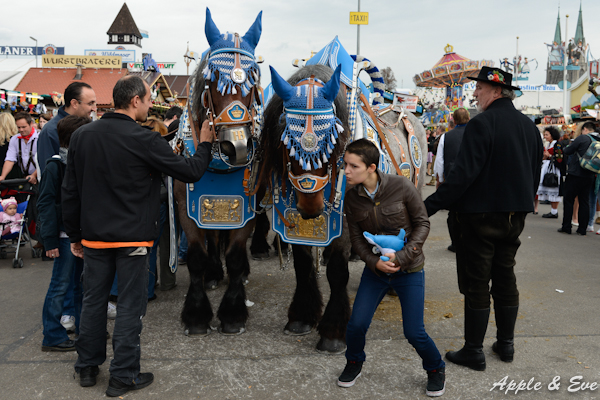 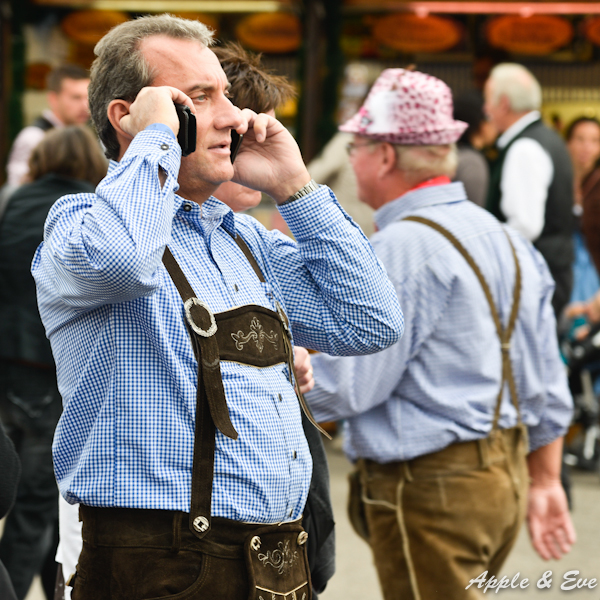 It did not take me very long to realise that I was not about to make photographic history, it was difficult enough to just move from place to place, forget about taking good photographs! A smaller camera without a backpack that seemed to get in everybody’s way might have been a better choice. It was more or less at this junction that I decided to just pack away my camera and join the party! 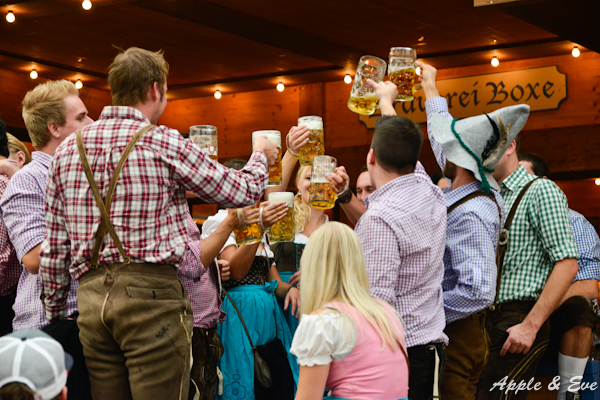 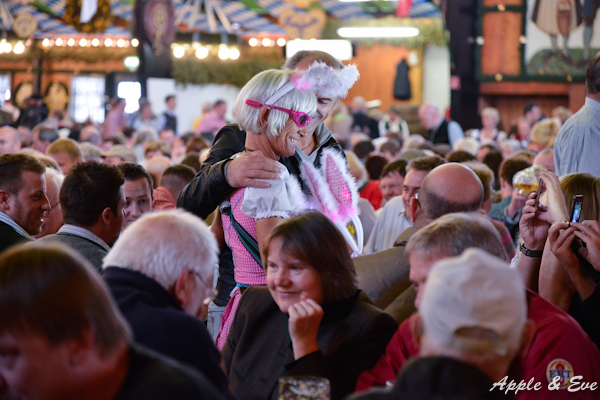 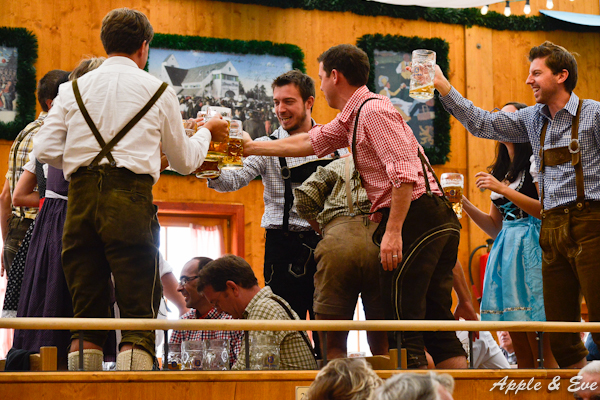 I never managed to figure out why some of the crowd insisted on standing on the tables, but that’s what they did – and enthusiastically so! 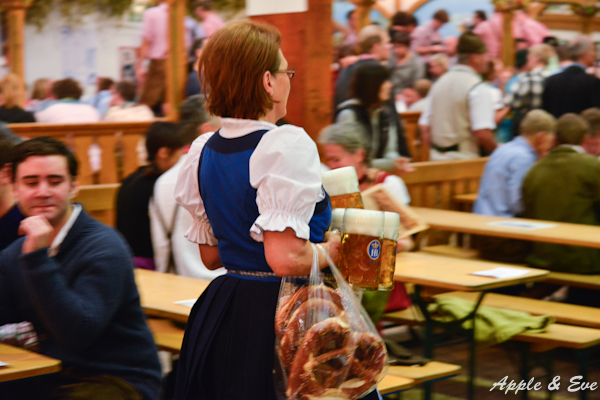 Beer and Pretzels seemed to be a very popular combination. 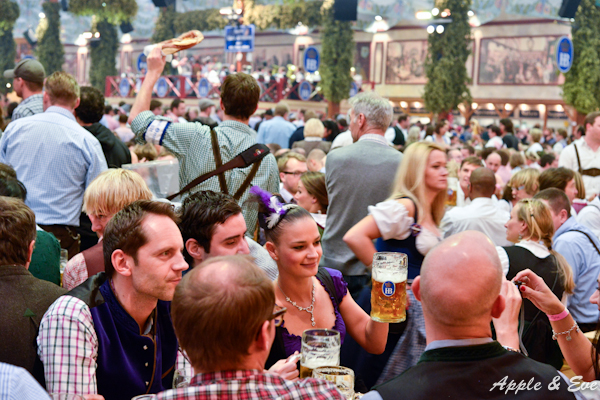 Note the pretzel being waved in the air – huge ones too ! 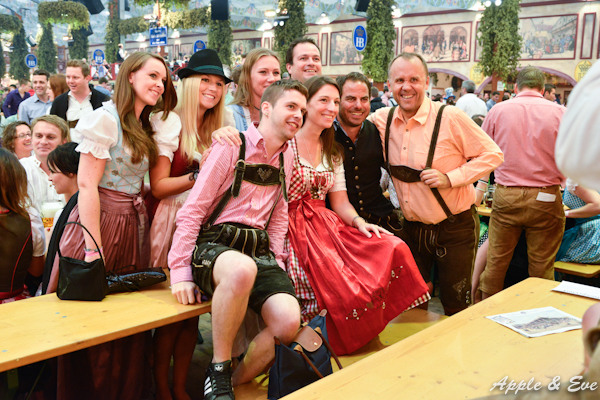 By now you are probably wondering if given another opportunity whether I will attend the Oktoberfest again ?

My choice of luggage that I will take along will be different, but it was such a tremendous experience that it will be hard to resist going again. The Oktoberfest spirit was not limited to the festival site either, the whole of Munich was in festive spirit and the festivities were wide-spread and carried on long into the night! 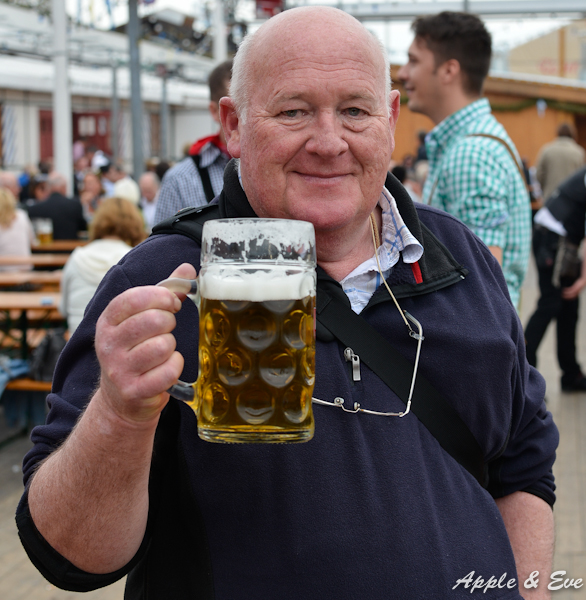 This is me, having my share of the 7 million litres of beer consumed!

← Pigtorial quest for Gayous Pretorius
The Baptism of Captain Friendly →